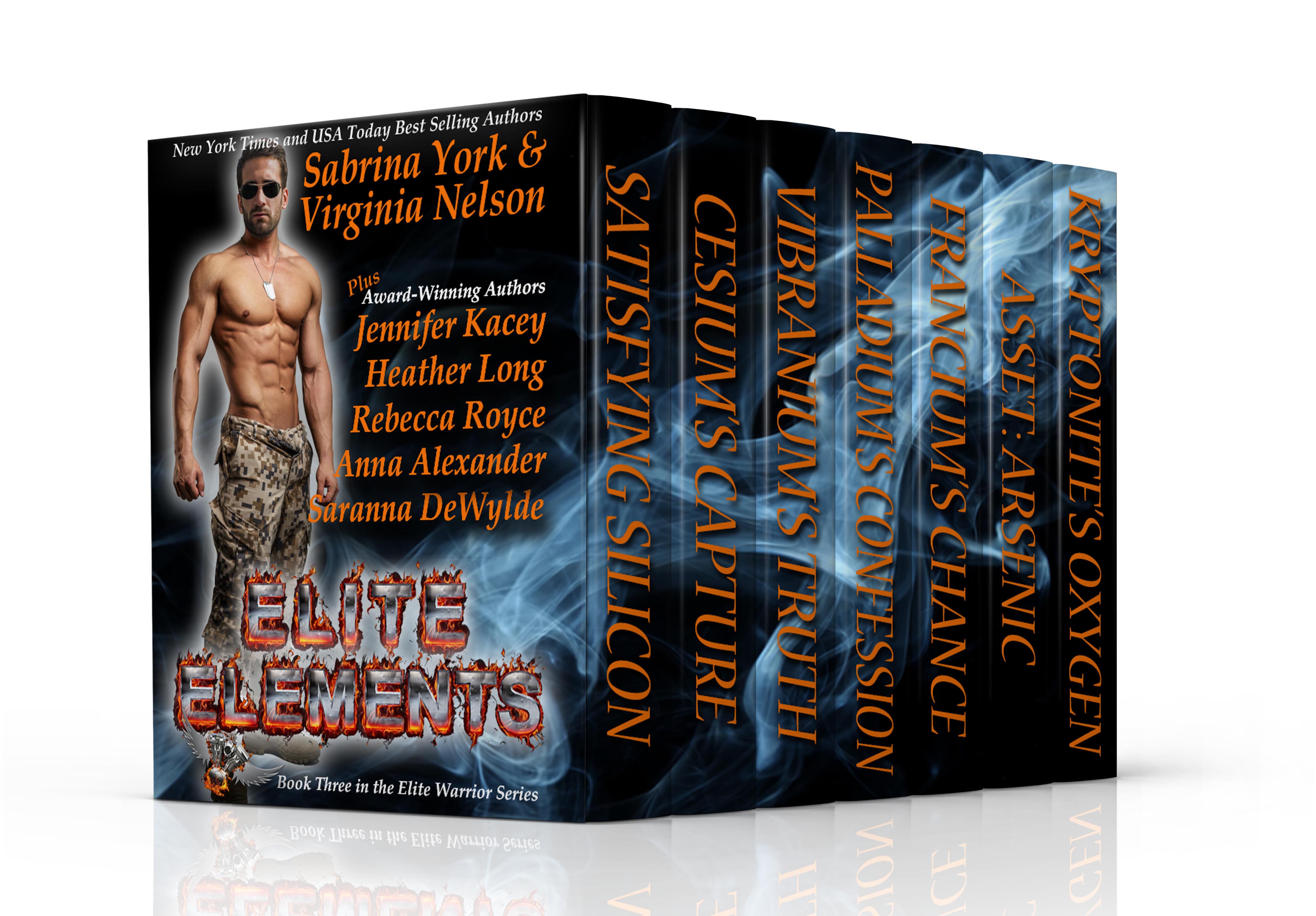 For most of their lives they’ve lived in the shadows, pulled from every nation and background, united by one common cause—an all-consuming hatred of Red Wolf. The unquenchable desire to rid the world of his very existence fuels them, drives them.
These men and women pulled the fallen Elite from the snow-covered wreckage of Operation Phoenix years ago. To some they’re called saviors. To others they’re called traitors.

As Red Wolf’s power grows, the end game they’ve sacrificed everything for may destroy them all. Or just maybe they’ll finally find the peace they’ve been hunting for.

Revenge is their salvation but is there enough humanity left inside them to save?

FEATURING:
Satisfying Silicon by Virginia Nelson
Lady Dead may be number five on his hit list, but she trusts that Silicon will come for her. Save her or kill her… either way, it’ll be a hot ride.

Cesium’s Capture by Sabrina York
The mission is all that matters…until he meets her.

Vibranium’s Truth by Anna Alexander
It’s not the size of the gun that makes a warrior, but the strength of her convictions.

Francium’s Chance by Rebecca Royce
Just because he’s on the right side of the fight doesn’t mean she can trust him.

Asset: Arsenic by Heather Long
Arsenic is playing a dangerous game, but one with hefty payout—Red Wolf’s head on a platter.

Kryptonite’s Oxygen by Jennifer Kacey
To rid the world of the deadliest wolf a broken girl must trust her kryptonite.

Jason “Coop” Cooper, AKA Cesium, is as cold as they come. Nothing matters except for the job—a lesson he’s learned through painful experience. But while on a mission in the gritty back alleys of Hong Kong to collect intel about one of Red Wolf’s criminal associates, Coop is stunned to meet a woman who reaches past his elaborately constructed walls. A woman who sparks a fire inside him. One that could burn him from the inside out.

Coop and Natalia come together in a clash of wills that threatens to destroy both of them. Other than their stubborn determination to complete their missions, they have nothing in common.

Natalia Petrova fixed her features into some innocent, seductive mien and Cooper smiled and gestured toward the foyer.

God, men were so easy to manipulate.

Sometimes it revolted her.

All she needed to do was bat her lashes and infer she might possibly spread her legs for them and they melted.

She forced down a familiar irritation, an unwelcome desire that there could be something more for her than her life as it was.

Her life was fine. Wonderful. Perfect.

It would be even better when she finally achieved her goal.

She was so close.

She couldn’t allow this man to fuck it all up.

The gorgeous bastard had been tailing her for days. He’d tried to be inconspicuous, but seriously, what woman with blood in her veins would not notice him? He was tall—seemed even taller here, in Hong Kong, where most men were in the five foot range. He was well over six. And his body…

She suppressed a shudder as he took her arm and led her across the elegant foyer of the hotel. His body was magnificent. Muscled and thick, bunching with energy and vigor. And then there was his face. Perfect features, beautiful blue eyes, long lashes and a noble nose.

She didn’t dare think of his lips. His lips on hers.

It was wrong to think of fucking him. Stupid, even.

She had a mission to complete—a critical mission that she needed to complete before Gregor figured out what she was really up to and dragged her back home with her tail between her legs. Fucking this man would only get in the way.

She glanced at him from beneath her lashes as they waited for the elevator. When his gaze met hers, when his beautiful lips kicked up into a small smile, she swallowed heavily.

Because, yeah. He made her drool.

That alone was ample reason to do her business and get out.

While Nat had never been afraid of any man, she had to admit, this one sent skirls of nervousness through her.

Or maybe not nervousness.

Maybe it was just lust.

It had been a while, after all.

The elevator door opened with a silent shush, and he set his hand to the small of her back and led her in. Funny how the contact burned, even through her blouse. Her nerves awoke and sang.

She told them to shut up.

As he pressed the button for his floor, her attention fixated on his thumb. Thick and blunt. Manly. It was—

Nat gave herself a mental shake. For pity’s sake. It was a thumb. Nothing to obsess about. Nearly everyone had one.

He nodded to an elderly couple who joined them in the car and as the doors closed, the four of them faced forward, staring at nothing as the elevator moved. Nat remained motionless, but her mind was in a whirl…because that thumb, his thumb, had begun some kind of heinous torture against her back. Sweeping, swirling, stroking.

She had no idea why her knees went weak.

No idea why her body liquefied.

It was only a thumb.

She was stronger than this. She always had been. No mere man had ever had any power over her. She’d gone to great lengths to make certain of it.

That was why this situation was so annoying…and scintillating.

Damn it. There was that whispered voice again. That resonating ache.

She attempted to tamp it down. Reminded herself of her mission. Of why she needed to be strong, resolute, cold…

The elevator stopped and the elderly couple stepped off with polite nods. Nat forced a smile at them, redoubling her efforts to maintain her professional façade. She needed information from this man and that was all.

What a pity then, that as soon as the doors closed, he whipped her into his arms, pulled her hard against him, and kissed her.

It was a blazing kiss, one that wiped her mind clean and sent her senses into a spiral.

God, had she thought his lips were perfect? They were beyond that.

He was beyond that.

She was immediately suffused with his scent, his taste, the feel of his hard, pulsing body. His arms around her, like steel bands, held her in place as he consumed her with a wild passion that only stoked hers.

He moved in, closer, closer, until he had backed her up against the mirrored wall. His broad hand skimmed over her hip, up and up, closing on her breast.

A sharp thrill cut through her as his palm scored her nipple and she gasped through the kiss.

His chuckle rumbled between them.

She had little opportunity to process her irritation when his hot mouth moved from her lips to the crook of her neck. The scruff of his beard scraped like a razor over her raw nerves, sending spirals of delirium along her spine. She tried desperately to be annoyed. She didn’t like this sense of…submission to her lust. She was used to being the one in charge, the one taking the lead. The one who didn’t care. Somehow, he made her care.

But she lacked the resolve to push away.

So to punish him, she raked his nape with her nails. It was a vicious swipe.

In fact, it roused him to greater passion.

He reared back and stared at her. His muscles went taut, his expression intense. His eyes burned.

“You are making me crazy,” he growled.

She found a little satisfaction in the fact that he seemed to be provoked by his lack of aplomb as well. Surely it was wrong to taunt him more.

She rubbed her belly against his hard cock nonetheless.

His nostrils flared, like those of a wild beast scenting its mate, but he merely chuckled again. “If you keep that up, I’m going to fuck you right here.”

She quirked a brow. “In the elevator? How bourgeois.”

“I don’t give a fuck.” He took her mouth again in a crazed frenzy, eating at her, devouring her, stoking the fire he’d built in her belly and making her as crazy as he. Indeed, she didn’t care where they were. Indeed, she would happily fuck him here—

It was irritating that the door slid open just then. Irritating because they had to part, had to step into the hallway, had to function like humans.

It took most of her reserves to put one foot before the other, even though he had a hold on her arm and guided her. Her vision blurred. Her body trembled. She could feel the arousal welling between her legs. She shook from wanting him.

The logical, well-trained part of her brain told her she should get him somewhere private—and his room was private—and begin her interrogation, discover why he was following her. Discover if her cover had been blown.

Another part of her, a far more feral and visceral part, saw an opportunity to slake the hunger that had been clawing at her from the first moment she laid eyes on him. To take what she wanted from this man and leave him panting for more.

Perhaps she could have both.

Hot sweaty sex, and the answers she needed…

Her Royal Hotness, Sabrina York, is the New York Times and USA Today Bestselling author of hot, humorous romances. Her titles range from sweet & snarky to scorching romance in historical, contemporary and fantasy sub-genres. Represented by Nicole Rescinti at the Seymour Agency  Visit her webpage at www.sabrinayork.com to check out her books, excerpts and contests.

Sign up for alerts on new releases with other vendors: https://books2read.com/author/sabrina-york/subscribe/1/28367/