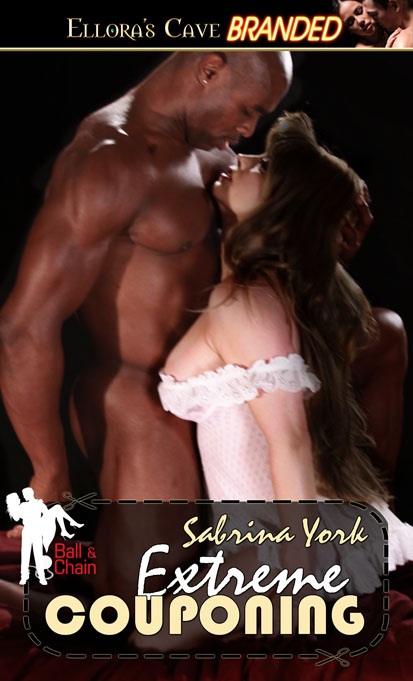 Bella adores her sweet, patient and gentle husband Tae. She would do anything to keep him happy—even pretend to be something she’s not. She acts as if she’s content with their vanilla marriage but she secretly yearns for something more. Something darker.

With each coupon Tae redeems, Bella sinks deeper and deeper into the lifestyle she’s always craved but never had the courage to demand. Now if they can just find a way for her to be the strong, independent woman Tae fell in love with and the quivering sub she is at her core…

Reader Advisory: Tae and Bella find some very inventive—and erotic—uses for everything from carrots to home-improvement tools. Be forewarned—you’ll never look at candy canes or duct tape the same way again.

By reading any further, you are stating that you are at least 18 years of age. If you are under the age of 18, it is necessary to exit this site.

An Excerpt From: EXTREME COUPONING

With a simmering glance at her, he slid a finger beneath the tape. A small booklet fell out onto his lap.

“What is it?” She scooted closer.

“Oh look. You gave me coupons.” He sounded excited. Thrilled even.

“Coupons?” She shook her head and took a sip of her coffee. What on earth was he up to? She was hardly a “coupon queen”. She was the kind of woman who used coupons as bookmarks.

In fact, he did all the grocery shopping. Well, if he wanted food in the house.

She wasn’t very domesticated. Never had been.

He flipped through the booklet, oohing and aahing. The sideways looks he sent her set a fire in her gut.

“Oh Bella,” he purred, pausing on one coupon in particular. “You shouldn’t have.”

She frowned. “Let me see that book.”

Before he could protest, she snatched it from him and flipped through the pages. And she began to laugh. Clearly he’d printed out this booklet on his computer.

And then she came to one that made the breath catch in her throat. She swallowed. Her pussy twitched.

It said, One hour of complete submission.

She froze. Every muscle in her body locked in place. Her heart pounded, her blood thrummed, her body liquefied.

He watched her intently, taking in every nuance of her reaction, his jaw tight, his eyes glittering. His tongue snaked out to wet his lips. “I was thinking about redeeming that one now.”

She didn’t even know how to respond so she just stared at him. They’d been married for nearly a year but he’d never once suggested anything kinky. Never once tried to push the boundaries.

Never once suggested anything even remotely risqué.

Damn it all anyway. Bella had never been a wimpy woman. She usually just took what she wanted from life. But in this, especially with Tae, she was tentative, cautious. Nervous.

Usually she was never nervous. But this…

This was something so personal. So intimate. So secret. She’d never had the courage to admit it to him. She’d been scared to death of how he would react if he knew the truth. If he knew what she really craved.

That he was asking for this, now, made her woozy.

She cleared her throat, lowered her lashes. “W-what did you have in mind?”

He waited until she looked at him before he spoke. “I think the coupon speaks for itself.”

“All it says is complete submission.”

An unfamiliar tension rose between them. Bella nibbled her lower lip as she contemplated the sudden urge to test his resolve. Or at least the depth of it. “For all I know, you’ll have me cleaning your man cave. Scrubbing the toilets. Doing your laundry.” Their marriage had become that, somehow. An endless list of projects and chores.

“I didn’t have cleaning in mind.” He tipped up her chin. “Sexual submission, Bella. Total. Sexual. Submission. Are you game?”

She swallowed, swamped by the apprehension skirling in her gut, the lust dancing in her pussy. It was all she could do to hold his gaze. “I don’t know.”

He was right. She did. She bobbed her head, a tiny nod.

She’d always wanted it like that. Craved it. Hungered for it. But then she’d met Tae, a guy who adored her for being a strong woman, for taking the lead, for managing everything. She hadn’t wanted to tell him the truth of it. She hadn’t dared.

She swallowed. “Say what?”

Her heart stuttered. She forced a laugh. “I can’t say that.”

Bella tried to sort through her conflicting feelings. She wanted this. Needed this. Had fantasized about this. And now he was offering it to her.

And damn it all anyway, it was only for an hour.

Shyness overcame her. She dropped her chin and whispered, “Yes Tae. I want to be your slave for one hour.”

“Sweetheart. Look at me when you answer.”

She did. “Yes Tae. I want to be your slave for one hour.”

His nostrils flared. A certain light glinted in his eyes and a raft of dimples exploded on his cheek. The stark beauty of his face snared her. It always did but tonight, backlit by a crackling fire and the lights of the tree, he seemed even more intense. From the dark, dominant brow to the high cheekbones, to those full lips…

He ripped the coupon from the book and gave her a look that sent a tremor through her. Maybe it was the heavy-lidded heat he invested in the glance or maybe it was the way his body tightened, every muscle, as he gauged her reaction. She knew instinctively that something very different was about to…arise between them.

It was like their first time all over again. Trying to make light of the electricity, the lust lashing through her, she accepted the coupon with what she hoped was credible aplomb.

She cleared her throat. “Okay, Tae. What do you want me to do?”

He didn’t hesitate. Not for a second. “I want you naked.”

“Extreme Couponing is an interracial romance between a married couple who have gotten a little stale in their bedroom play. The characters are sexy and interesting, the plot is familiar but enjoyable and the setting is well described. Overall, a short but entertaining read.”

Oh this is one hot book. Be warned readers a trip to the hardware store or the grocery will never be the same.
http://www.thejeepdiva.com/2013/03/review-extreme-couponing-by-sabrina-york.html