You Never Forget Your First…

Saddle up for a sexy ride with 18 bestselling and award winning authors as they share with you their first in a series. These cowboys will claim your heart with their rough edges and raw emotions. Dust off your boots, and join us for a ride you’ll never forget.

Forget Me Knot by Lori King

Will her vacation into the heart of cattle country turn out to be a mistake?

Five brides for five brothers…at least that’s the deal the Daltons have struck with their boys. Each son must marry in order to inherit a piece of the ranch they love so much.

A cowboy who knew nothing of love. A city girl who wishes she didn’t.

She may be the softness to smooth his rough edges. That is…if he can convince her to give an ol’ rodeo bum a chance.

Being a Graham isn’t easy, and it’s about to get a lot harder for one stubborn lawman and the woman who still owns his heart.

The Heartsong Cowboy by Melissa Keir

Can two people, one horse and the power of love cure a little girl?

Gimme Some Sugar by Stephanie Berget

She’s is a genius with cupcakes and croissants. He needs a ranch cook to whip up beef, beans and bacon. Love never tasted so good.

Her Fated Cowboy by Donna Michaels

Thrown back into the path of her first love, she finds hers is not the only heart fate has damaged.

She left town to chase her dreams…he stayed and ignored his…can they find love again?

A marriage of convenience ignites into a steamy romance and brings two strong wills together.

Make Mine a Cowboy by Sandy Lea Sullivan

She writes fantasy cowboys for a living…but she never expected to find her own on the back roads of Hill Country, Texas.

A cowboy honors a promise by working at a nudist resort but to win the sexy owner’s heart, he must bare more than his soul.

From gunslinger to ranch owner. He’s finding respectability a lot more dangerous than his former life of sin.

Under Pressure by Rhonda Lee Carver

The Stone sisters know their way with a gun, rope, three-inch heels, and a cowboy’s heart.

He can tame the wildest stallion, but can he tame a stubborn redhead that wants nothing to do with him?

The Real McCoy by Sabrina York

She mistakes him for a stripper…he is happy to comply!

Get a taste of:

The Real McCoy by Sabrina York
Book 1 in the Stripped Down Cowboys Series
It’s like Magic Mike…with cowboys! 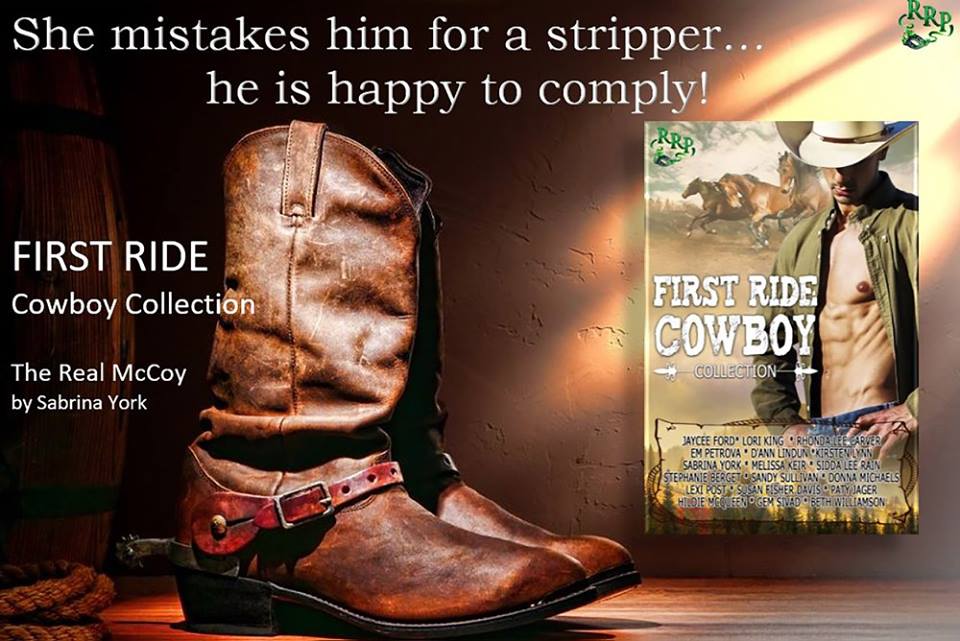 At a wild, girls-only weekend at a rowdy “stud” ranch, she meets the gruff, dominant man of her dreams. It’s too bad the sexy stripper is only a pretend cowboy…or is he?

She shouldn’t have taken the shot.

For God’s sake, what had she been thinking? She’d been on a low-carb, low-calorie diet—with no alcohol—for a month. Not because Blaine had called her fat. That had nothing to do with it. She just wanted… She just wanted to do it for herself. Yeah.

But it would be awesome to run into him somewhere, say the bank or the coffee shop or that bar on Grill Street, looking like a vixen. She only had ten pounds to go to hit vixen weight. It was a helluva ten pounds. They didn’t seem to want to budge.

And damn, she really wanted something to eat.

And damn, the tequila had hit her hard.

So hard she’d left the weekend kickoff party—although, to be honest, she’d wanted to leave since the pumping music and the grinding bodies and the strobing lights were starting to make her eyelid twitch. As down-home country as the bedrooms were at this ranch-slash-resort, they sure knew how to throw a bacchanal at night.

It was pleasanter out here behind the house, staring up at the stars and enjoying the kiss of a soft breeze. There were no sounds but the rustle of the leaves in the trees, the crickets and the occasional croak of a frog.

Her head hardly spun at all.

She leaned back and closed her eyes and imagined how amazing it would feel to be twenty-one again and interested in those kinds of men. To rub against a hard chest and feel his thickly muscled arms hold her close.

But none of those boys had ignited a flicker of interest in her. They’d all been rubbed smooth. Although several of them, and one in particular, had made it clear he wanted to dance for her.

It was a damn shame.

It would have been fun.

What kind of man would she want, if she wanted a man? Tall, for sure. Broad. Hard. Rough. Maybe a little wicked twinkle in his eye.

A door slammed to her right and her eyes flew open. She blinked as a man strode toward her through the shadows. Her heart lurched and the breath caught in her throat. Yes, her heart whispered. Yes. That was the kind of man she wanted.

He was big, and broad and roped with muscle. His stride was sure, determined and powerful. He wore boots that kicked up dust with every step, and chaps and even a Stetson. He had high cheekbones and a well-formed brow. His square chin was spattered with a dark shadow. His shirt was buttoned.

This guy could dance for her. No problem. She’d love to have him rub himself all over her—

His steps stalled as he caught sight of her.

“Well, hey there, cowboy,” she purred. It was probably the tequila purring, but he didn’t seem to care. He peered into the shadows.

She did him the favor of moving into the light. She liked that his nostrils flared and his throat worked. He touched the brim of his hat. “Ma’am.”

Sexy. This stripper knew how to play a role.

“The party’s already started.” She sidled up to him—again, the tequila; normally she would never sidle up to anybody—and put her hand on his chest. The muscles rippled in response and something inside her rippled as well. It was probably her womb. Crying out for a visitor.

It had been a while, after all.

She leaned closer, against him, and it was good. She nestled her nose in his beautiful neck and took a whiff. And daham, he smelled sinful. Wicked. Alluring.

“What is that fragrance?” she asked. She needed to know. Wanted to bathe in it.

He chuckled; the sound rumbled through her. “Soap.”

“Mmm. Yummy.” She scudded her palm over his chest, his thick arms and down to his trim waist. He held steady as she explored, staring at her through insanely thick lashes. It should be illegal for a man to have lashes like that. His features were locked and hard. A muscle ticked in his cheek. “You’re hard,” she murmured. Oh, God, he was.

“Yes, ma’am. I am.” This he said in a low purr, one that gave a sizzle of double entendre to the words.

Something cracked inside her. It was probably the remainder of her pickled restraint. He was the hottest man she’d ever seen, much less touched. His heat soaked into her and melted her, liquefied her.

She couldn’t stop her roving exploration and wouldn’t have anyway. Her hand drifted lower. His body tightened, his breath hitched as she reached his belt. And then she found him.

Her knees locked. Her pulse rocketed through her veins. Because Jesus God, he wasn’t just hard, he was rock hard…

Check out all Sabrina’s Stripped Down Cowboys: http://sabrinayork.com/stripped-down-cowboys-giveaway/

Her Royal Hotness, Sabrina York, is the New York Times and USA Today Bestselling author of hot, humorous romances. Her titles range from sweet & snarky to scorching romance in historical, contemporary and fantasy sub-genres. Represented by Nicole Rescinti at the Seymour Agency  Visit her webpage at www.sabrinayork.com to check out her books, excerpts and contests.

Sign up for alerts on new releases with other vendors: https://books2read.com/author/sabrina-york/subscribe/1/28367/