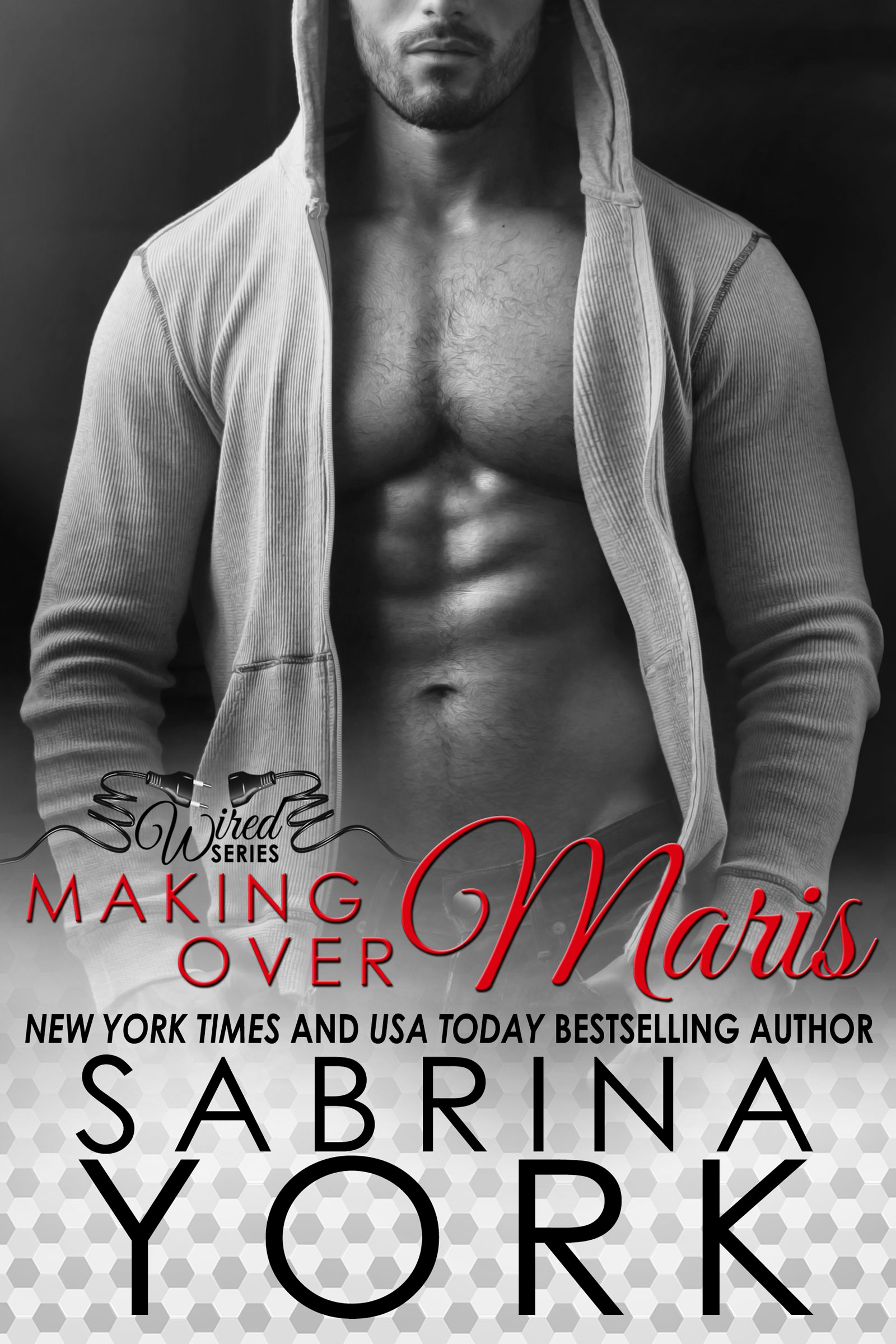 When über-nerd Jack asks Sara to make him more attractive to women, she can’t say no—even though it’s an impossible task. He’s shaggy and doughy and hopelessly inappropriate. He has no style or emotional intelligence but he’s a good person. And a great friend. What Sara never expects? Beneath all that fur and geekiness is a steamy hunk just waiting to emerge.

Jack takes Sara’s regimen very seriously, working out and losing weight until he feels like a new man. He even complies with her command to shave his beard—because Jack didn’t ask Sara to make him over so he would be attractive to other women. He only wants to be attractive to her. They go on a series of fake dates, each hotter and more sinful than the last. It’s not long before Sara discovers Jack’s secret desire to be dominated and what began as an arrangement becomes something amazing—something that could be real.

An Excerpt From: MAKING OVER MARIS

“So… Have you thought about it?” Jack could have kicked himself. He hadn’t intended to burst into her office and blurt it out like that. He’d meant to be suave and slick.

He should have known better.

He’d never been suave and slick.

No. He’d hovered in the vicinity of Sara’s office—after sending Kenny on a meaningless errand—and barged through the door and pounced upon her as soon as Kat left.

He plopped into the chair and, because he didn’t know what to do with his hands, laced his fingers.

Sara studied him, dissecting him in that way she had, with her head tipped to the side, wrinkling her button nose. She was so cute when she wrinkled her nose. He forced himself not to wriggle. His cock didn’t listen. Something about her eyes, her lips, her scent, always stirred him.

He shouldn’t have this kind of reaction to her. In the office. Everywhere. But he couldn’t help it. He just did. Always.

When she looked at him like that, when she spoke to him in that clear, commanding voice, it was even worse.

Or better, depending on one’s perspective.

She cleared her throat. “Okay. I’ve thought about it.”

She dropped her attention to her blotter and meticulously rearranged several deformed paper clips. His heart pounded a painful tattoo as he waited for her response. “And…” She met his eyes—God, she was gorgeous. “If I do this, we need to have an understanding.”

Relief, or something like it, trickled through him. An understanding was awfully close to an agreement. A promise. “Okay.”

Sara sucked in a breath. “First of all, we need to agree this is an impossible task.”

“Okay. Improbable then. My chances of success are…dismal.”

Dismal? Jack’s belly dropped. He fiddled with the wiry hairs on the back of his neck. He didn’t like the way this was going. It was depressing that she thought so poorly of him. “Am I that hideous?”

Her eyes widened. A flush rose on her cheeks. “Oh my God, Jack. No. I didn’t mean it that way.”

“It sounded that way.”

“Jack…” She rubbed her hands over her face. “Okay. How about this? We have a long way to go. Can we agree on that?”

“Sure.” He knew he was pouting. But he had a damn good excuse. She’d pretty much come out and said making him attractive to women—to her in particular—was a hopeless cause.

“My worry is this. I can teach you all the right things to say and coach you on how to act around women, prescribe a diet and exercise plan and even give you a makeover. But if you don’t listen to me—if you don’t follow the plan—I fail.”

“I’ll listen. I’ll follow the plan.” Hell. He’d follow her anywhere she wanted to lead. If she only knew…

Something fierce stirred in her eyes. “It’s not going to be easy, Jack. I’m gonna work you.” Why he shivered at the tone in her voice, he had no clue. Or maybe he did. “I want you to agree to honor our contract—even if you drop the ball.”

“Of course.” He always kept his promises.

He put a hand over his heart. “I swear.”

She sat back. The fire in her eyes flickered and sputtered out. “Okay. So next week I’m going back East to spend some time with my mother—”

“How long will you be gone?” Damn. He hated it when she was gone.

His heart squeezed and he wanted to say something comforting but couldn’t find any words. Sara’s mother had been in and out of the hospital for a year. They were very close. Each time her mother had a relapse, Sara suffered.

Jack had never had a mother so he couldn’t relate but he imagined having one and losing her would be even harder than never having one at all.

“In the meantime, I’ll put together a plan for you.”

“A…plan?” His mind spun. How on earth was this going to work if she wasn’t even here?

She put her hands flat on the desk and skewered him with a glower. “Religiously, Jack.”

“Okay.” He tried to not wriggle in his seat. He loved it when she got all…adamant. “So you’ll do it?”

Relief cascaded through him. Relief and hope. It was a tiny sprig of hope, but hope was hope. “So when do we begin?”

She gazed at him. Some strange emotion he couldn’t interpret flashed over her features. “Now.”

Oh. God. Excitement and satisfaction and panic surged through him. “Now?”

“Yes. I need to do an assessment. You know. To figure out exactly where we are.”

He swallowed. “An assessment?”

“Okay.” He liked games. He scooted to the edge of his seat.

She wrinkled her nose. “Be serious, Jack.”

“Let’s pretend I’m a woman you see at a bar. And you’re interested.”

“What’s the first thing you do?”

Okay. He could wrap his brain around this. He shifted to the side and pulled out his wallet. Found his trusty cheat sheet and unfolded it and spread it flat on the desk.

“What the hell is that?” She gaped at the rumpled, well-worn paper.

Sara blinked. “You have a flowchart for picking up women.” Not a question.

“Let me see that.” Before he could stop her she snatched the paper away. Scanned it. “Oh God.”

He knew what she was seeing. He’d studied this flowchart a hundred times. Still, when she read it aloud, he winced.

“Picking Up Chicks.” She grimaced. “Seriously, Jack? That’s what you named it?”

“Yes.” What else would he name it?

“‘Step One. Assess the situation’. Okay. That works. ‘Does she seem cranky?’ Cranky? Seriously, Jack? Cranky?”

He shrugged. “It’s a critical variable.” It was. It was exceedingly difficult to pick up a cranky woman. “Statistically speaking—”

“You kind of are.” This he muttered. She didn’t hear. Or maybe she did. Maybe she was ignoring him again. She did that.

With a derisive snort, she crumpled up his precious template for seduction and tossed it in the trash.

With a strangled “eep” he dove in after it, dug it out, refolded it and tucked it back into his wallet. It had never worked but it was all he had. He needed it.

She glared at him. And then for some reason she softened. “Women are not an empirical science, Jack.” She gestured to his wallet. “We’re not all alike. There is no ‘one size fits all’ approach to winning someone’s heart.”

Yeah. He got that. “But you need to have a standard operating procedure—”

“No, ya don’t.” She blew out a breath. He loved the way it made her bangs flutter up. “Don’t you see? This kind of thing comes off as cheesy. Planned. Practiced.”

“And that’s…bad?” How could planning and practice be bad?

“Women don’t want to feel like they’re an insect being dissected or analyzed. They don’t want to be one option in a sea of possibilities. They want to be special. They want a guy who responds to them on an instinctual level. A guy who is so interested, he can’t help but be charming. Not a guy who has to be reminded to be seductive—by an SOP.”

She buried her face in her hands. “No. You don’t. That’s the point. Oh Jack, I’m going to need a couple days to think about this.”

His pulse stuttered. “But you already promised…”

“Yeah.” Her cell phone buzzed and she picked it up to check the screen. Her lips tightened and she set it back down. “No prob.”

Damn. Why did she seem so dispirited? He’d seen the tears on her cheeks when he interrupted her meeting with Kat. He’d hated her tears. Hated even more that he didn’t have any right to wipe them away.

“Sara.” He waited until she met his gaze. “Thank you.”

This meant everything to him. More than she could ever know.

“Sure, Jack. Give me a couple days to think about this.”

She stared at him for a minute and then said in a very small voice, “You can go now.”

Right. He could go. But he didn’t want to. He didn’t want to go. He wanted to fold her in his arms and hold her and make whatever was making her sad disappear.

He didn’t have that right either.

And he never would.

But for the next few months, he’d have her attention.

And that would be worth a thousand trips to Paris.

When brothers Tristan and Adam started a tech company with their college friend Jack, they made one firm, unbreakable rule: thou shalt not fish in the company pond.

What a pity all three men find themselves entangled with women they cannot resist!