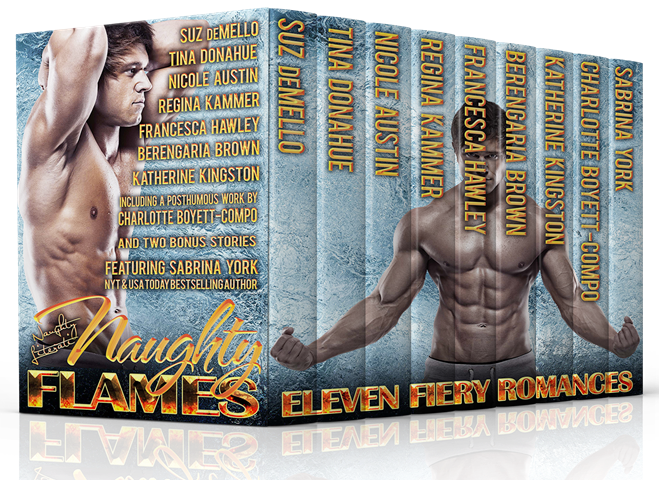 GET IT NOW: AMAZON

Featuring:
HER ROYAL COMEUPPANCE
Sabrina York
Furious at the betrayal of her once-loyal woodsman, Queen Cressida intends to make him pay. But Nicholas turns the tables, determined to thaw Her Royal Majesty with the heat of a passion she cannot resist.

SAVING SOPHIA
Suz deMello
“It doesn’t matter” is cynical Sophie Fortune’s motto. Then her best friend is killed and Sophie herself is attacked. Can Detective Inspector Nick Wendell keep her safe and heal her heart?

MY WISH COME TRUE
Tina Donahue
Baby, it’s hot inside…
For Laurel, Christmas so sucks. She’s out of a job, money, and luck until her neighbor Scott plays Santa. This tall, dark, and sexy hunk delivers sweet decadence and holiday magic that makes being bad oh-so good.

ROYAL BRAT
Nicole Austin
Loving two men, my stepbrothers, got me exiled to a foreign country. Without them I’m lost and alone, cast adrift on turbulent seas without a compass or rudder. In order to finally be together we’ll have to navigate a course through the landmine infested waters of my traumatic past.

DISPUTED BOUNDARIES (Stories From The San Juan Islands)
Regina Kammer
Garrison life along the disputed Canadian-U.S. border is so uneventful Royal Marine Braxton Thorne mostly just fools around with his fiancée Tilda. But when American adventurer Gideon Roberts provokes unexpected desires, Braxton finds himself in a war over the boundaries of his heart.

CHASING FLAVORGASMS
Francesca Hawley
When food blogger, Taylor Simmons writes a scathing review of his restaurant, John “Doc” Holliday challenges her to return so he can give her the flavorgasm she’s been chasing her entire life.

SET ME ON FIRE
Berengaria Brown
Blair, Alex and Kurt meet in the stairwell of their office building during a fire drill. The building may not be burning, but they are, for each other.

HER GARGOYLE GUARDIAN
Katherine Kingston
Ginny decides to pursue a relationship with Ben despite the risks to her heart. She can cope with his claim that he’s a shape-shifting gargoyle, but his warning that they will have only a short time together gives her pause.

THE WYNDVYPER’S PROMISE
The final posthumous work of Charlotte Boyett-Compo
Audriana Lansing has fled her overbearing family and made a life for herself, until she gets trapped between bounty hunters searching for her and an old flame who doesn’t believe in forgive and forget.

BONUS MATERIAL:
FIST ME
Berengaria Brown
Maeve nearly fell off her barstool when sexy Taryn asked her to fist her. But is it the right thing to do?
*This is an enlarged and re-edited version of a formerly published story.*

PLEASURE QUEST
Tina Donahue
She’s into virtue. He’s not. On a pleasure asteroid, he’ll show her what paradise really is.

READ AN EXCERPT OF HER ROYAL COMEUPPANCE

An annoying illicit thrill walked down her spine as he took a step toward her with something glinting in his eyes. But she was no longer the innocent trusting girl with whom he’d once dallied. She was no longer a passionate soul. The long cold winter of her marriage had frozen her to the core. Nothing could thaw her. Certainly not his laugh, his smile, his smoldering gaze.

There was no place for him in her life now.

She swallowed the lump in her throat at the thought, at the regrets screaming through her. They were as pointless as her frail, withering hope.

Her hands were red with cold. Surely that was the only reason she turned away from him and stormed over to the hearth. Trembling, only a tad, she held her palms closer to the licking warmth. He followed, stood behind her. Far too close. Heat rolled off him in waves, bathing her back.

“Cressida.” Oh, how did he do that? His voice, a low rumble, resonated through her, sending an echoing twinge through her barren womb. “Your clothes are damp. You should take them off.”

She spun around with a squawk of indignation.

Oh dear. Perhaps she shouldn’t have done that. He was so close, the tips of her breasts scraped over his bare chest. Her nipples pinged with delight at the contact.

Drawing in a sharp breath, she stepped back.

And then, before her mind could process his intention, he put his large hands to her waist and lifted her, spinning her around to settle her in the chair by the fire. He knelt before her and flipped the hem of her velvet dress up onto her knees. Shock, outrage and an illicit brand of anticipation warred within her, making her utterly incapable of speech or movement.

Slowly, he slipped her shoes from her feet. And her stockings. Then he cupped each foot in his warm grasp. Rubbing. Stroking. Stoking some long-dead fire in her belly.

“Stop that,” she hissed, attempting to yank away. He did not allow it.

But then, truth be told, she didn’t want to yank away. Dear Lord, it was exquisite, the firm caress of his knowing fingers on her tender flesh.

What a pity it was wholly inappropriate. She should make him stop.

“It’s cold outside,” she muttered. “I just marched through a blizzard.”

“Hmm.” He bent his head. His hot breath trickled over her toes. She squirmed, tried desperately to hold in a moan. “I noticed that.” He glanced up and their gazes met. “You came to chastise me, to punish me for my defiance.”

“Yes.” All right. Perhaps she hadn’t needed to snap. But now he was trickling his fingertips over her instep and at the seam of her toes. It was delicious, but far too much to bear.

“I also noticed you came alone.”

“And?” She succeeded in wrenching her foot from his grasp.

He found the other.

“I thought it…interesting that you didn’t bring your Royal Guard.”

“I— I…” She hadn’t bothered to rouse them. She’d been too infuriated.

“As though you wanted to be alone with me.” His expression tightened. Gone was the subservient minion. All of a sudden, he was once again the dark and dangerous boy who once had held her down and kissed her. Teased her. Mercilessly. His fingers rose higher, massaged her calves. Then, when she didn’t protest—couldn’t, in fact—they rose higher.

Slowly, he drew her knees apart.

“Do you remember the games we played, Cressida?”

“I’m not that girl any longer.” It should have been a defiant snarl, but it came out as more of a plaintive whimper. Life could be so unfair.

For they had only ever played.

GET IT NOW: AMAZON

ENTER THE GIVEAWAY:
a Rafflecopter giveaway

← Do you have them all? Check out Sabrina York’s Cheat Sheet!
Spurred On (Stripped Down Cowboys) by Sabrina York #giveaway →