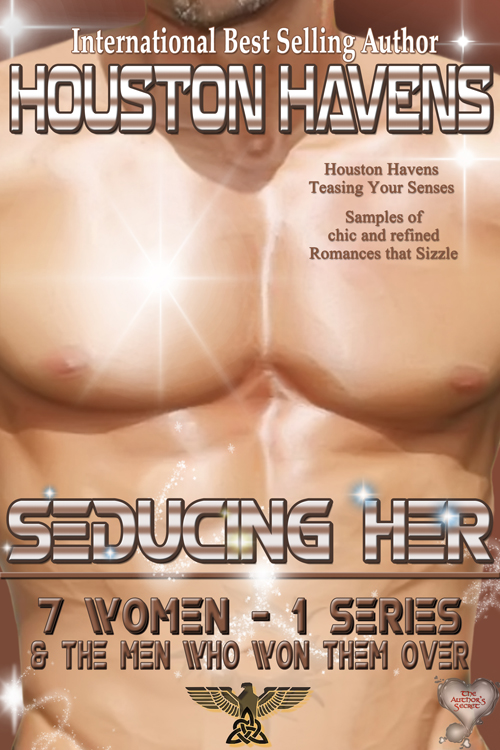 The brilliant, multi-layered, bestselling author, Houston Havens thrills your senses with this 282 page TEASER BOOK. The first 4 chapters (only) of each of the first 4 books in this series.

* Havens books are like watching your favorite block-buster movie come to life. Her 5 star talents in blending an intellectual romance with political intrigue involves suspense, mystery, and murder that create major dramatic tension in these heartfelt soul-searching novels with elegant yet scorching love scenes between amazing three-dimensional characters.

* Havens adventure stories are incredible, believable, and wildly captivating. They’re vividly action packed to give you chills and thrills with lots of twists and turns in these exciting novels. Her books will capture your heart and imagination with pure romance, kick ass heroes and heroines while merging you into the frightening reality of the Underworld, corrupt governments, and big brother watching, that some readers find a little too close for comfort.

* Havens arouses your mind with Nibiru, believable conspiracy theories, and the many suspicions about the Denver airport in this set of novels that read like the Terminator, Divergent/Insurgent, and 50 shades of Grey combined.

* Havens will captivate your senses with these sexy, funny, and intriguing romances in this absolutely unforgettable series!

4860 AD Earth. Humans had been warned yet refused to believe doomsday was at hand until it was too late to find sanctuary.

Since the beginning of humanity an unseen presence guided human beliefs, actions, and lives. The Secret Blood Doctrine is the law the Dirt Dwellers Elites live by. They have their own goals and reasons for controlling the Earth. The humans were a means for accomplishing their goals, and a way to cover operating costs by culling them at the end of each cycle. At the arranged times, the Dirt Dwellers Elites withdrew to the Underworld with a few chosen ones to await the renewal.

Sinful Surrender, top psychic spy Fay Avalon suspects what she’s remote viewed in her mind-travels and what her post-catastrophic dystopian government of the Underworld is stating as fact is a lie. In search of the truth, she escapes the Underworld, only to land in the arms of her enemy; the Airborne. Will she get the chance to uncover the secrets the Underworld is hiding before those on the surface, Logan and his brothers, discover who she is? Will they make her their wife or execute her as a spy?

Phantom Desire, the search for truth continues with Fay’s friend Chandra Lamar, but from a past she can’t remember. A psychic vision pushes her to recall her purpose for being, but it’s a ghost that awakens her desires for a life she fears she’ll never have. Does Chandra find true love in the arms of the Nodin men or does her Phantom Desire forever own her heart? Will uncovering her true past expose the Underworld’s deception?

Exposed Ecstasy, Tessla Reto escapes the Underworld after finding the two men sent to help her dead. She’s rescued by a handsome stranger…or is she? Faerydae’s search for truth abruptly ends when a woman who stirs everything he’s spent a lifetime denying falls into his life. Will Shomar be able to win the woman of his dreams or will a fairy always have her heart? Can the Underworld’s long reach find Tessla, daughter to the ruler of the Dirt Dwellers, on the space station or will they find a way to draw her back to the surface?

Intimate Betrayal, Kindise Wyatt is in search of her lover and escapes her Star Rider capture with the help of an Old World Mole. What she doesn’t know is, his sexy but mysterious friend, Jaden Valenti is a Dirt Dweller with orders to assassinate her. Will betrayal crush Kindise’s inner strength to help the Freedom Fighters defeat the Dirt Dweller Elites?

2 Responses to Seducing Her: A Psychic Romance Series Teaser Book from Houston Havens