Buy Stone Hard SEALs: Complete Collection on Amazon, or get it free with Kindle Unlimited 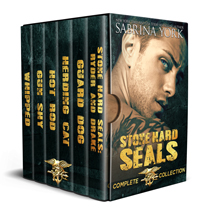 “I love an alpha male who fights just as hard for his woman as he does for his country.”

“If you like sexy men in the military, bold women and HEA with a little danger thrown in-BUY THIS BOOK!”

Until they share a kiss, that is. Until those lethal hands prove they have other talents as well. Talents that leave her breathless and wanting and weak. The last thing either of them wants is a relationship, but the scorching passion between them cannot be denied…even though it will undoubtedly spell disaster for them both. (Originally published in Kindle World)

But Garrett has other ideas. (Originally published in Kindle World)

Book Five: Hot Rod
A standard witness protection mission goes wrong, thrusting Matt Tate and his target, a wise-cracking hooker named Vixen LaFleur, into a fight for their lives. But flying bullets and lurking villains are not nearly as dangerous as risking the heart. Against his will, Matt is attracted to the dauntless, exasperating woman he’s supposed to be protecting, but she is harboring a secret. One that could heal his wounded soul, or crush it. (Originally published in Kindle World)

Can this former SEAL change her mind before his time runs out? (Originally published in Kindle World)

Dane swears he will never suffer the same fate. But when he meets a woman who can take all his dominant loving and beg for more, he realizes he may have met his match. It’s a damn shame she’s the one woman in the world his man-code deems untouchable…his best friend’s sister.

Buy Stone Hard SEALs: Complete Collection on Amazon, or get it free with Kindle Unlimited