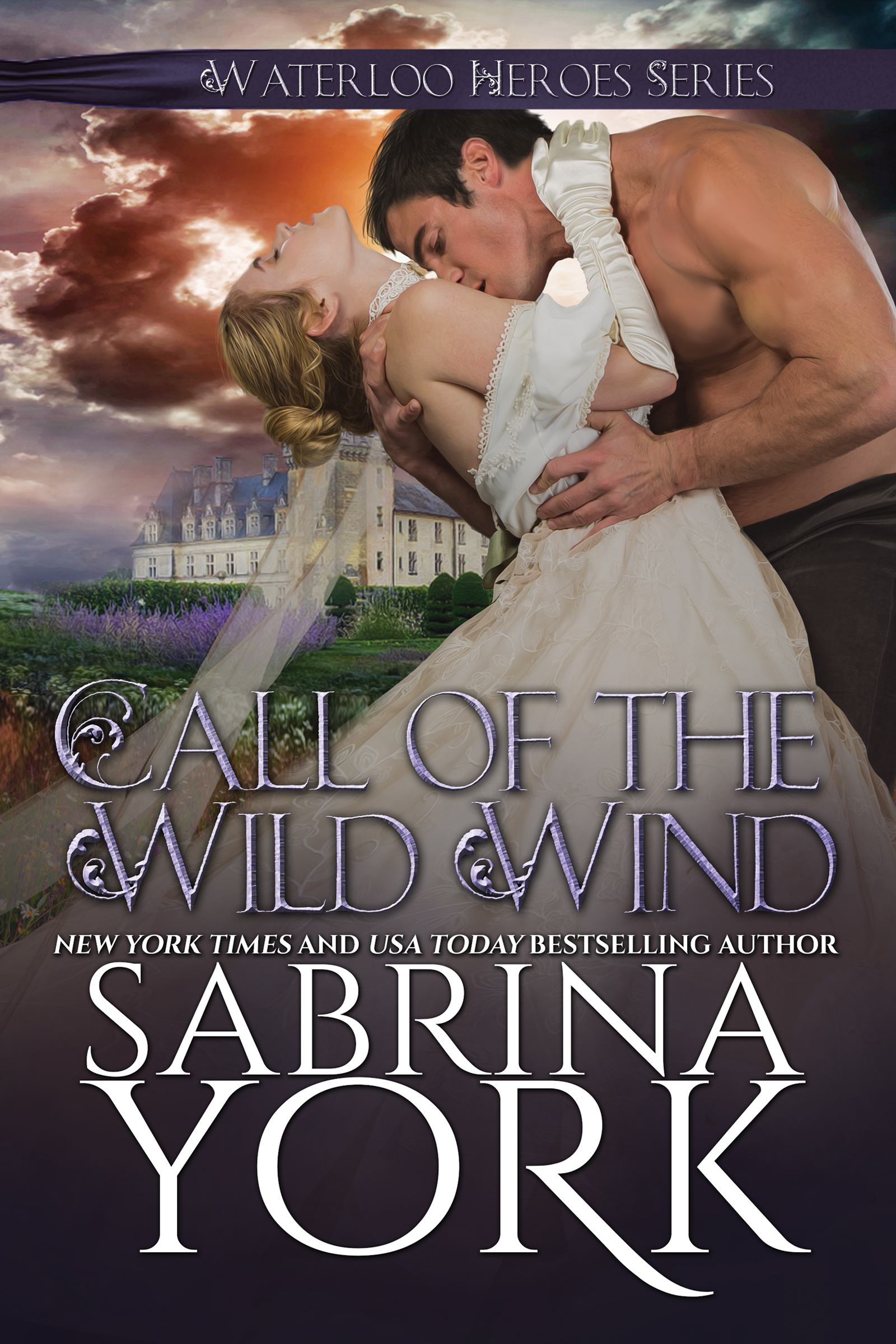 Call of the Wild Wind
By Sabrina York

Though the world is convinced that Lady Britannia Halsey’s fiancé perished on the fields of Waterloo, she is certain he is still alive. And she is determined to find him…before her twenty-fifth birthday.

When the Earl of Wick sees a portrait of her beloved Peter, and claims he looks just like a wounded warrior working on his highland estate, it only seems logical to hie off to Scotland and meet this man.

To Britannia’s annoyance, she finds herself traveling with the Annoying Earl of Wick, a man who is far too attractive for her peace of mind. A man determined to seduce her…

Britannia gulped. The command had utterly thrown her for a loop.

How strange that a curl of excitement whipped through her belly. She resolved, however, to be as aloof and blasé as he, and stepped behind him to help him shed his coat.

A frisson of restlessness, a coil of tension shot through her at the sight of this man in his shirtsleeves. This was a shockingly intimate tableau. She reminded herself she was his servant and there was nothing more to it. But when he turned around, so she could untie his cravat, she began to shake.

She drew in a deep breath and began working the knot.

All the while, he glared at her with a muscle pulsing in his cheek. Surely she was not so clumsy or slow to deserve that.

When she began on his buttons, he snarled something that sounded like, “Never mind,” and turned away to finish the job himself.

It wasn’t wrong for her to watch.

She was a valet, after all.

And, frankly, she was curious.

Besides, it wasn’t as though she hadn’t seen plenty of naked men in her day. If one counted today.

But oh. That frightening and dismal experience had done nothing to prepare her for this. As Charles pulled off his linen shirt, and his bronzed back was revealed, she nearly swallowed her tongue. Mr. Cole-Winston had not had muscles like that, muscles that bunched and rippled when he moved. Mr. Cole-Winston had not had a bottom like that, either. Charles’ bum was beautifully formed and tight. His legs were long and thick and, all things considered, rather intriguing.

She tried not to stare, but could not help herself.

Had she really thought naked men were hideous?

This one was like an Elgin marble. Perfect. A Greek God.

As he shed the last of his clothing, and Charles turned to the side to step into the tub, it almost seemed as though he was shielding his most private parts from her, which was, all in all, a disappointment.

“Well?” he barked as he sloshed into the water.

He glanced over his shoulder at her. “Are you going to wash my back?”

Wash his back? Touch him? She gulped. Dare she?

She tipped her head to the side. “If you wish.”

“I do so.” He waved to the cloth and soap Will had left on the table and she gathered them up and then slowly made her way to his side.

She didn’t even try to peek over his shoulder into the water.

Unfortunately, it was murky.

Or fortunately. Depending on one’s point of view.

Gingerly, Britannia dipped the cloth into the water and made a lather and then began scrubbing Charles’ back.

This was, again, a new experience for her. And again, a surprising delight. His skin was warm and smooth. His muscles were finely formed. She found she enjoyed washing him very much.

He, however, did not seem to enjoy it at all. His muscles were tense and he moved restlessly as she worked away on his back.

“Would you like me to wash your hair?” she asked.

“No,” he snapped, though there was no call for snapping.

“Shall I wash your front as well?”

He whipped around and frowned at her, then snatched the cloth away. “No.”

She did not understand the consternation on his face. Really she didn’t. And…why did he look as though he was in pain?

An odd command, but she did so, and then she heard him rise from the water. Her gaze flicked to the mirror and she froze as she caught a glimpse of…

And he was aroused.

She knew enough about the way of the world to spot that right off.

But why would he be aroused by his valet?

Oh dear. She’d heard about that, too.

She peered at him over her shoulder as he dried himself with the towel and dressed in what he assumed was semi-privacy. Oh, he was a beautiful man.

Why should it matter to her if he preferred young valets over ladies of the ton? It wasn’t as though the two of them had any kind of future. But somehow it did matter, and the fact that it did matter irritated her greatly. And made her sad.

She was in love with Peter.

She had no business wanting any other man. Most specifically, him.

He turned around without warning, catching her gaze on him, and he frowned. “This was a mistake,” he said.

“I beg your pardon, milord?”

His lips twisted bitterly. He raked his fingers through his hair. “Oh leave off, Britannia. I know it’s you.”

Shock whipped through her. Her knees wobbled and she sat with a plop on the bed. “What?”

Well, blast. She put out a lip. “When did you realize?”

“Really?” He tipped his head to the side and gaped at her. “The first bluidy moment I saw you by the mail coach.”

“You did not know then! How could you?”

He snorted a laugh. “Because I’ve met you? I know your face. Your expressions. Your smile.”

“Why on earth did you pretend you did not?”

He snorted again; this one was not a laugh. “I thought to teach you a lesson.”

She couldn’t help it. She chuckled.

He was not amused.

“You thought to teach me a lesson?” How adorable. “Is that why you made me fetch and carry for you?”

“You hardly fetched or carried anything.”

“I intended to. That counts for something. And you’re the one who stormed downstairs all growly and rude.”

“Rude? Rude? I was worried about you. You disappeared and didn’t return.”

“I was right there in the—”

“Oh, yes. I heard the songs they were singing. What do you think your father would say if he knew you’d been exposed to such language?”

She batted her lashes. “He would probably think you were the one who exposed me to it.”

It was wrong of her to be amused by his chagrin. Or not.

“I was the one who saved you from a brigand and don’t you forget it.”

There was no call for finger shaking.

“I won’t forget it. I am certain my father will be very appreciative.” She frowned at him. “Would you mind finishing?” Not that she didn’t appreciate the glorious expanse of his chest, but it was a trifle distracting.

She waved at his person. “You are undone.”

Why he muttered, “You have no idea,” was a mystery. But he did make an effort to do up his buttons, though he got them wrong.

His gaze snapped to hers and his face went a little red and that muscle in his cheek began bunching again. “I…what?”

“Are you sending me back to London?” Might as well throw it out there. But she wasn’t going. If she had to, she would slip out in the night like a wraith and find some other means of making her way to Wick.

He huffed a breath and collapsed into the chair. “We both know how that would end up, don’t we?”

“Do we?” She widened her eyes in an attempt to look innocent. He was not fooled.

“At this point, it is better for you to travel with me, where you will be safe. Though we will need to hire a companion.”

“A companion? Whatever for?”

“You are a lady, remember?”

“Within the last week, I’ve been a boy and a valet. That seems to have worked out fine.”

“Has it?” He leaned forward and pinned her with a glare. “What do you think would have happened if I had not come along when I did this morning?”

She sniffed. “There is no need to belabor the point. I believe I did thank you.”

“But your gratitude, or lack thereof, is hardly at issue here. You were in dire danger of being—”

“Ravaged.” He scrubbed his face with his palms. “Can you imagine what could have happened?”

“I was prepared to protect myself.”

For some reason, her declaration did not appease him. “Really? And how would you have done that?”

She sat up straight and tipped up her chin. “Caesar has taught me to box.”

“And I know where a man is most…vulnerable.”

Again, she did not understand his insinuation. “Regardless, it seems perfectly obvious to me. We shall travel together to Wick, but there is no need for a companion. I can continue posing as your valet.”

“Wandering around strange inns and flirting with the stable boys?”

“I was not flirting!”

“Will and I were simply being friendly.”

“And we all know where that leads, do we not?”

“Balderdash.” She turned away and stared at the door. “One would think you were jealous, the way you are carrying on.”

“Jealous?” A roar. One that shook the room. “To be jealous, I would have to want you for myself.”

The silence that fell, following his pronouncement, was a deafening one. Slowly, she turned and looked at him.

His eyes burned. His face was a mask. His hands were closed into fists.

And she saw it there. On his face, in his expression.

An unholy thrill rose up within her. Because there, in that moment, all thoughts of Peter faded. No man existed but this one. This large, perfectly-formed, glorious specimen. And she realized that her impatience with him, her restlessness in his presence all along, had been speaking to one thing and one thing only.

She desired him, this man who was not her betrothed.

It was really something of a surprise, but not nearly as surprising as the realization that he wanted her as well.

He stood and prowled across the room. He stopped just short of her, touching her with nothing but his breath.

“Britannia, I am trying to be an honorable man.”

She stood as well and faced him, toe-to-toe. “The way an honorable man pretends not to recognize a lady in distress so he can use her as his servant?”

“I think I explained, I was trying to teach you a lesson.”

“Which is so very flattering really. Women love it when men show them their place.”

“It was not meant like that and you know it.”

“Such language. Whatever would my father say?”

“I believe he would say you are in need of a spanking.”

Her eyes widened. Outrage swelled. If he even tried, she would saw him open with the butter knife. “You are something of a beast, you know.”

Well, there was no answer for that.

But then, he didn’t expect one.

Rather, he took that last step toward her, yanked her into his arms, and kissed her.

It was not a gentle, demure or respectful kiss. Not in the slightest. It was like the wild wind on the moors. A crashing tumult of a storm at sea.

And it was mind-boggling.

Get it now for 99 cents (or Free on Kindle Unlimited)