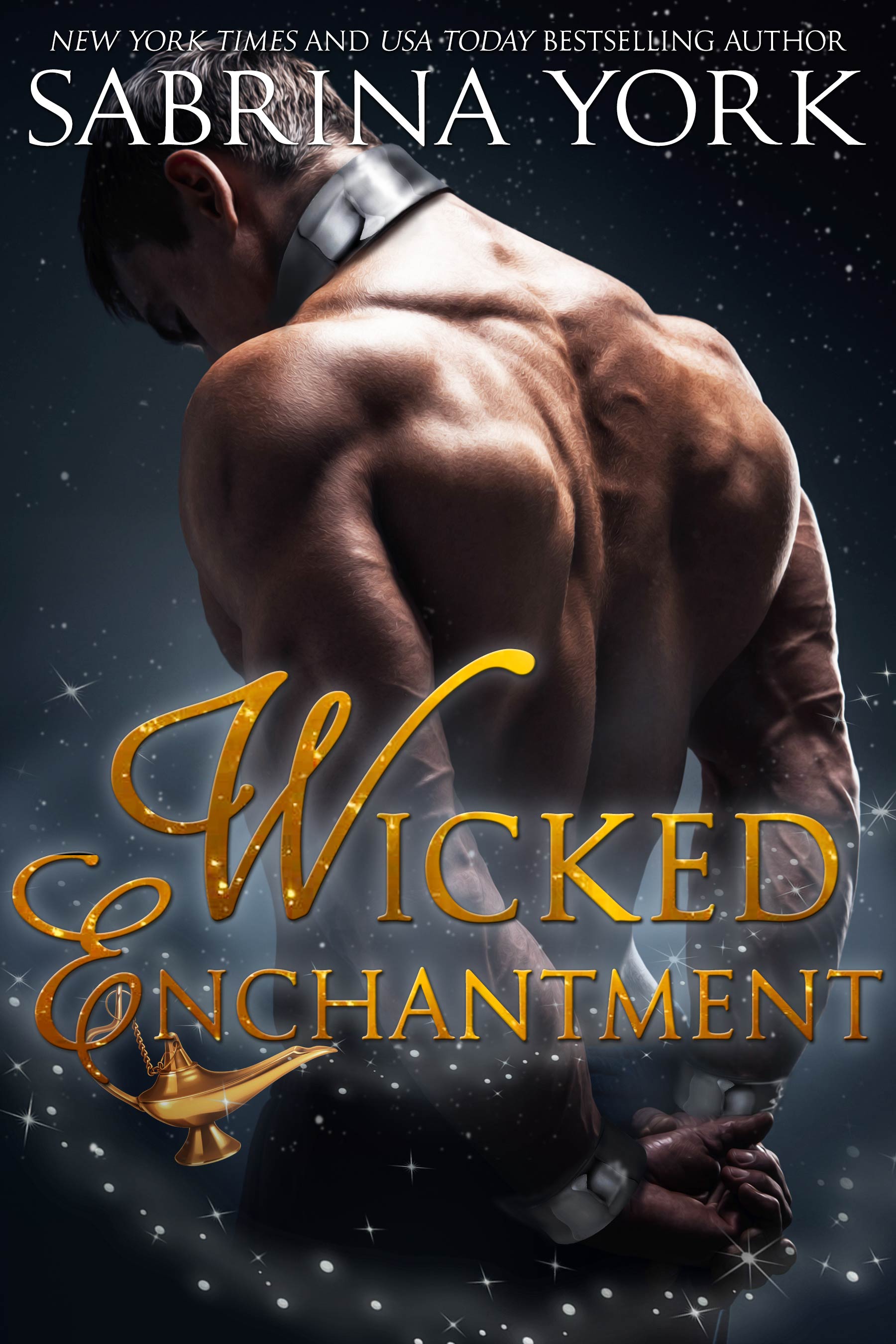 
Consigned to a magical prison, Sir Keeshan has suffered torment after torment for thousands of years. The curse of a powerful Djinn entombed him in the lamp, damning him to an eternity of pleasing the women the lamp brings him, but never knowing true love. Every hundred years or so, a new woman appears and they are both are ensnared in an enchanted web of dark desire. And then, just as he grows to care for her, she is spirited away, back to the world.

Such is the nature of his curse.

But when Aimalee arrives, Keeshan knows something is different. She is different. And his feelings for her are undeniable. He has no idea how long they will have together and, desperate to not waste a second of his time with her, Keeshan cannot help but indulge his every craving…and hers.

When the clever minx helps him solve a mystery that has been haunting him for ages, he can’t help but hope she may be the one to help him break the curse.

Hope is a dangerous thing in Keeshan’s world, especially because he knows her departure, when it comes, will destroy him.

Aimalee shivered as an unfamiliar inclination struck her. She wanted to drop the pillow and press her body against him. Rub against him. He was so beautiful. So perfect. She longed to touch him.

Of its own volition, her hand rose. At the last instant, just before their flesh connected, she curled her fingers.

He winced as she withdrew, winced as though she’d slapped him. Tiny tears clung to his lashes. “Please, Aimalee.” His voice was ragged. “Please touch me.”

She stepped away, ignoring the desolation sweeping across his countenance. It cost her but she forced those primal urges down, back into her subconscious where they belonged. Something wasn’t right here. Women didn’t just suddenly transport into sumptuous bowers. Gorgeous men with smoldering eyes didn’t simply appear from thin air. And most importantly, Aimalee didn’t have thoughts like this.

She couldn’t give in to these cravings. Not until she understood what was happening to her. Her analytical mind would not allow it.

As though he could read her thoughts, a frown marred his sculpted brow in fascinating furrows. He stepped closer and closer still—though not close enough to touch. His breath was warm on her face. “Don’t fight it, Aimalee. You cannot resist. Please don’t try.” He bent closer and his nostrils flared like a stallion catching the scent of a filly in season. He licked his lips.

My but they were beautiful lips.

And my, oh my. He smelled of sandalwood and sin. The combination made her head spin. She desperately attempted to eradicate these errant thoughts. “Where am I? What happened?” More questions swirled but this was a good place to start.

“Please.” Beads of sweat dimpled his upper lip. Heat roiled from his broad chest. Everything about him was hard. “Not now. No questions now.” He whirled away with a growl, showing her his back, frustration clear in every rigid line. As he moved, the dim light glinted off the metal encircling his neck. Aimalee realized it was hewn of the same strange iridescent metal of the lamp.

Certainty dawned and with it a sense of incredulity. “I’m inside the lamp.”

He shot a glance at her over his hunched shoulder, a wounded animal. “Y-you touched it.”

“I’ve touched it many times before.”

“Many times.” A shudder racked him. He began to shiver, to shake. “But never with…never with…” Never with…what? He didn’t complete the thought, as though the words were too painful to utter. He moaned in agony and stumbled into the shadows.

She followed, racked with worry—he looked as though he was dying—and lightly touched his shoulder. He froze at the contact, sucking in a deep gasp of air, exhaling it on a small whimper. As their flesh connected, a sizzle shot up her arm, rocketing to her core. Something tight within her released.

And then she realized…the release hadn’t come from within her.

It had come from within him.

Invisible chains binding him shattered and fell away.

He straightened and stood. Sublime relief descended upon him like a cloud. “Thank you,” he gasped. “Thank you, Aimalee.” He drew his knuckles along the curve of her shoulder then trailed down her arm, sending riots of sensation through her. “You touched it with your bare hands, you see. And the lamp brought you to me,” he said, answering her earlier—long forgotten—question. He caressed her hand, lifted it to his lips then drew her thumb into his mouth and gently sucked.

Molten lava, deep in her core, churned and spat.

He kissed her knuckles, one by one. “You are here for me, Aimalee. For this.” His scalding touch trailed back up her arm. She jerked in reaction but didn’t protest. Her body was heavy, drugged with desire. Her mind befuddled, rapt in it. Enthralled.

He tugged gently at the pillow she held before her. She watched in mute dismay as he tossed her armor carelessly aside. “God, Aimalee. You are even more beautiful in the flesh.”

Reverently, he cupped her breast. And then his head descended and those lips—those delicious lips—wrapped around a coral crest. Sucked. Pleasure rocked her. Exquisite trills danced along her spine. Tremors rippled through her womb.

But still…she resisted. As difficult as it was to fight against the alluring enchantment he was weaving—and it was difficult—she lurched back and gasped, “Who are you?”

Instead of answering, he scraped her nipple—sending spirals of delight coiling up her spine. Oh! It was getting harder and harder to resist him. Harder to focus on her outrage as he enticed her deeper into his web.

But she was not the only one besieged by temptation. His body was taut as a bowstring; he fairly hummed with the tension.

He pulled her into his arms. The shock of his hot skin against hers from chest to groin made her light-headed. He traced the line of her back from her buttocks to her shoulder blades.

“I am sorry, Aimalee,” he murmured, his tone limned with remorse. “But I cannot answer your questions anymore. I cannot wait. It has been far too long.” He lifted her hair and bent to place a gentle kiss on her nape. With his tongue, his velvet, drugging tongue, he traced a strange and sinuous symbol there.

A peculiar warmth blossomed where he’d licked her. It drifted down her arms, across her chest, infused her body and soul. Her nipples tightened. Her body liquefied. A hot rush of arousal seeped from her womb. Her clitoris throbbed and a scorching hunger growled and snapped like a long-caged beast.

She wanted him like she had never wanted a man before. Savagely.

She ached to fist her fingers in his hair and drag him down on top of her. To take his lips with her own. Suck on his tongue. Consume him. Grind against that magnificent cock until he howled with need. Until he took her. Fucked her. Impaled her.

Her mind reeled with pleasure and passion…and confusion.

Hadn’t Carter told her repeatedly that she was frigid?

“What are you doing to me?” Even to her own ears, the cry was laced with pleasure, desire, delirium. She placed her palm flat on his chest to push him away but at that touch, passion swelled—the passion in her and the passion in him, tangling, twining. His skin was smooth but his hard muscles bunched beneath her touch.

He threw his head back and groaned in ecstasy. Or perhaps agony. Or both.

Easing her down onto the cushions, he covered her. The sensation of his hot, sweat-dampened skin against hers sent a shock wave through her. He nudged her legs apart. Neared. She writhed beneath him, eager, wanton, lost in wonder. Ravenous for him. Impatient.

He did not make her wait.