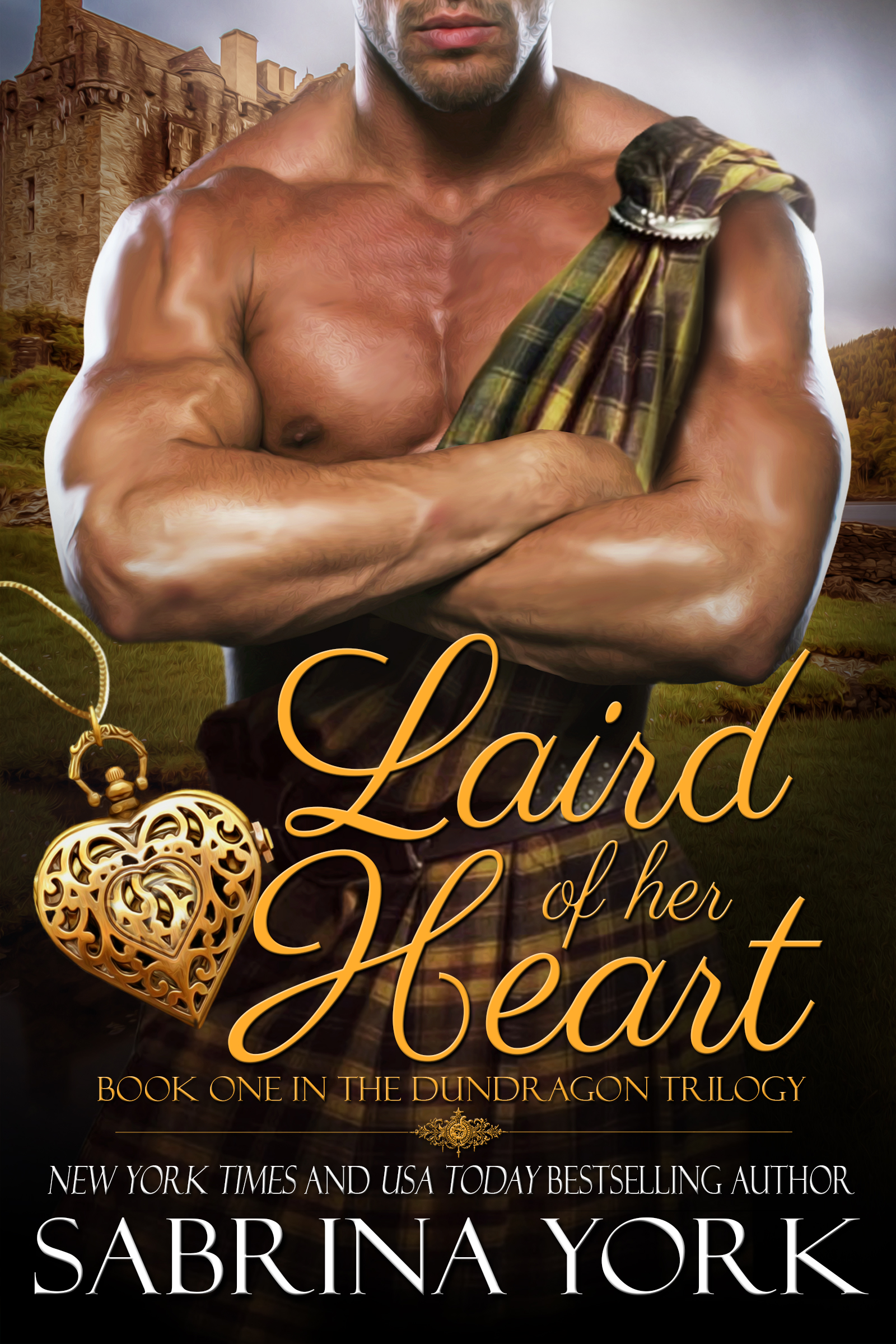 When Maggie Spencer is mysteriously transported to the Scotland of her ancestors, she is stunned to come face to face with him. Dominic Dundragon, the man she’s been half in love with her whole life. A man who’s been dead for 700 years.

They both have enemies aplenty. Will she have a chance to win his love, or will this adventure end in disaster?

Maggie yelped as, without warning, the burly warrior named Declan whipped her up into his arms and tossed her over his shoulder. To her horror, she lost the hold on her locket.

“Wait,” she cried. She wriggled to get free, but his grip was too hard. When she pummeled his back with her fists as he strode from the circle of stones, he chuckled. The beast. But to be fair, he was so large, it would have felt like a kitten batting him. “Put me down.”

“I willna,” he said. “The Mackintosh will decide how you die.”

All right. That shut her up. For a minute. “Die? Why do I need to die?” What the hell had she done to him?

The man following, an enormous blond with a scar tracking his cheek bent down to peer at her. “The Mackintosh’s doona tolerate spies.”

“I’m not a spy.” Seriously. She wriggled more and Declan smacked her ass.

She’d kill him when she got free. Just kill him.

“Yer wearing the Cameron colors,” the blond said. “And the Mackintosh’s doona—”

“Right. I know. The Mackintosh’s doona tolerate spies.” Her head was starting to spin from being upside down and jounced around with each step. Her temper was on a short leash. “But honestly, if I were a spy, would I wear the Cameron colors? It seems a little counterproductive in my opinion. I mean, if I’m spying and all. I might as wear a sign that says, oh, I dunno, honk if you love spies.”

His brow rumpled but he didn’t respond. At least, not to her. “She speaks strangely,” he complained to Declan.

Her captor snorted a laugh. “She dresses strangely too.”

“Aye. She does at that. I’ve heard the Cameron lasses are a wild lot, but I had no idea—”

“I’m. Not. A. Cameron.” She reached out and smacked the blond, but only because he came close enough. He reared back and gaped at her—as though he’d never been smacked before—and then he quickly moved out of range.

It hardly mattered, because, apparently, they had reached their destination, a camp on the edge of the woods. The sounds of nickering horses and clanks of pots gave her her first clue—she was facing the other way, after all.

Her second clue was that Declan dropped her on the ground. She landed with an oof. She glared at him. He didn’t seem to mind in the slightest. “Go get my brother, Ewan,” he barked, and the blond trotted off to one of the larger tents.

When she stood and brushed off her jeans, Declan bristled and she shot him a sardonic glare. Did he think she was stupid enough to run away? For one thing, these enormous men had her surrounded. For another, she never ran. Not if she could help it.

Instead, she made a quick survey of her surroundings. The camp was little more than a huddle of tents with the forest on one side and a sweeping plain on the other. A small herd of horses were hobbled to one side and a deer roasted over a pit fire. An entire deer. Before she could silence the thought—she often had that problem—she said, “You killed Bambi.”

Declan’s brow rumpled. “I dinna kill anyone.” And then he asked, “Who is Bambi?”

“Never mind.” She crossed her arms and turned away pretending to ignore them. But she wasn’t. She was aware they were all staring at her like she was a curiosity in a zoo, but she was taking in tiny details as well. Like the fact that their clothes were all handmade and simple. Their hair appeared to have been cut with a chainsaw and their beards were scraggly and long. Their weapons were what made her mind really start to spin though.

One held a crossbow that dated from the thirteenth century. Another had a Mackintosh dirk that resembled one she’d seen in a museum once. Declan had a simple calfskin sporran tied to his belt.

Odd. Could she have wandered into some renaissance faire? But no. It had been evening when she stepped into the woods and now it was daytime. Early afternoon. And the acres of woods around the house belonged to the family. It couldn’t be—

“So.” She flinched as a deep, melodious voice wafted to her on a hint of humor. Shivers danced through her, along with a prickling sense of premonition. “You’ve captured a Cameron spy?”

She must be hallucinating. She had to be.

He was the hero of her dreams come to life.

Large, looming and in the flesh.

Her head went woozy. Her vision blurred. And then, for the first time in her life, she fainted.