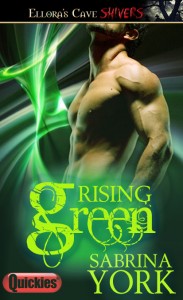 What People are Saying about Rising Green…

“I’m already a fan of Sabrina York (i.e. Adam’s Obsession). It was fun to see her depart from a BDSM-y office romance to something so different. It takes talent to jump genres successfully, and she completely pulled it off.

The alien plant ‘invasion’ scene was disturbing and very memorable. I seriously won’t be able to look at parts of my garden the same way again. Though short, the characters had juice and I cared about what would happen to Sage right away. I love that each sex scene is so unique – very character driven with little details that almost put you in the room with them. And I love the intelligence Sabrina brings to the genre. She writes as if she expects her readers to be smart and able to figure things out, which I appreciate.

All in all a good use of $2.99 and a couple hours. I’ve really never read anything quite like it before. Can’t wait to see what kind of exotic naughtiness she dreams up next.” Amazon Reviewer

“Sage is the botanist, and the only woman, on a science expedition. She discovers this strange plant, almost like a large green nest of leaves and vines. As she’s taking samples and photos, a blossom/pod bursts open, showering her in plant spores. Somehow, later, she awakes, prone in this nest. And you know how they say kudzu is the plant that ate the South? Well, this plant does some very unusual things to Sage with its crawling vines, probing tendrils, and stalking bulbous head. There’s not only the alien-plant tentacle sex; there’s also m/f and m/f/m action as Sage is compelled by a new and insatiable sexual hunger to have every man, and his sperm, on this team.

It’s all very erotic and graphic, and even the strange plant scene is oddly sensual and titillating, although eerie and with a sinister feel to it as well. This erotica is about 36 kindle pages long, has a sci-fi/alien feel to it with the plant sex at the beginning of the story, but the ending is where that horror erotica element comes in, feeling dark and moody, and even macabre. Rising Green is for erotica readers who like to try the odd and the unusual, those readers who go for some invading plant tentacles and lots of hot and hungry sex before the horror ending.”  Amazon Reviewer