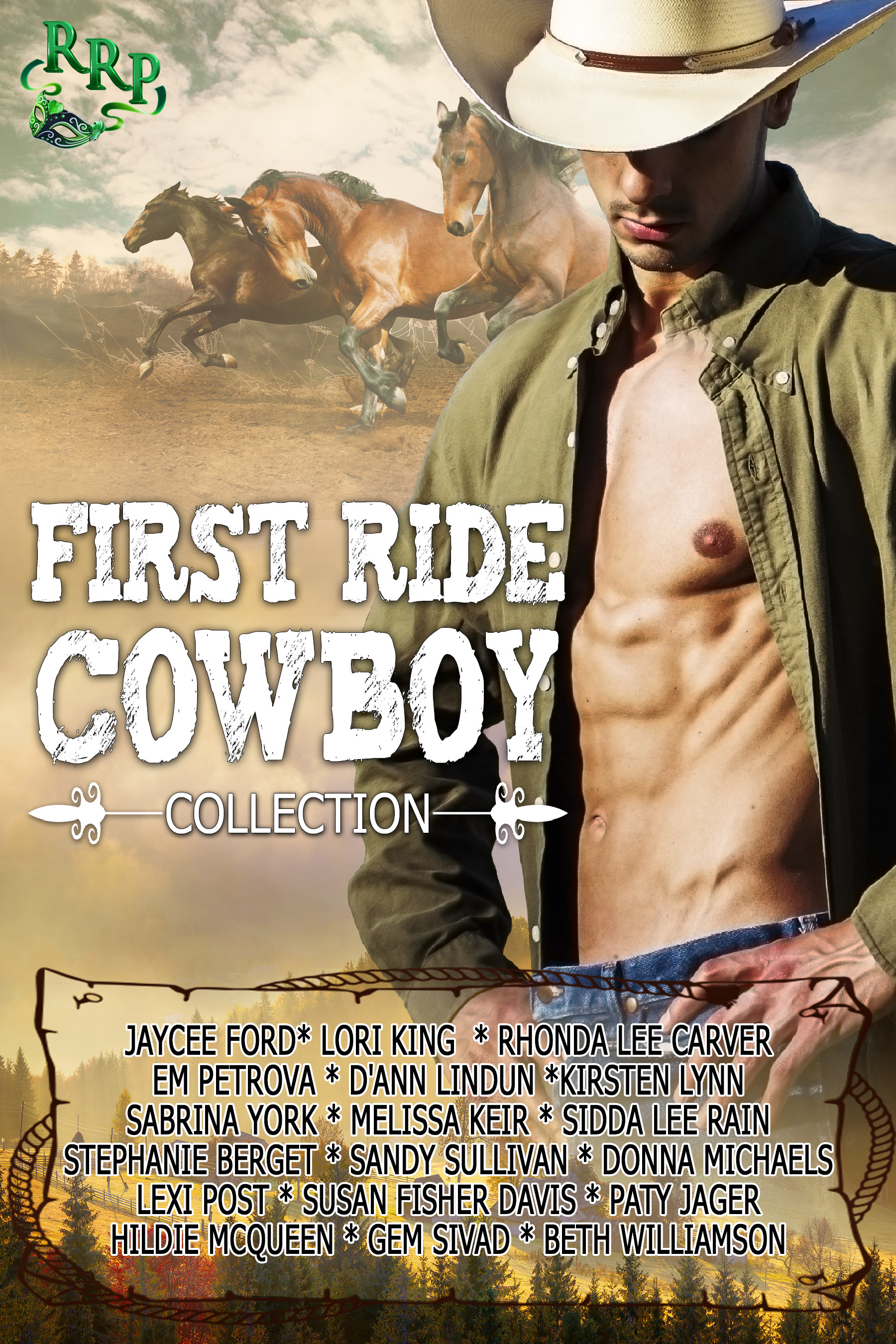 You Never Forget Your First…

Saddle up for a sexy ride with 18 bestselling and award winning authors as they share with you their first in a series. These cowboys will claim your heart with their rough edges and raw emotions. Dust off your boots, and join us for a ride you’ll never forget.

A cowboy who knew nothing of love. A city girl who wishes she didn’t.

Forget Me Knot by Lori King

Will her vacation into the heart of cattle country turn out to be a mistake?

Five brides for five brothers…at least that’s the deal the Daltons have struck with their boys. Each son must marry in order to inherit a piece of the ranch they love so much.

She may be the softness to smooth his rough edges. That is…if he can convince her to give an ol’ rodeo bum a chance.

Being a Graham isn’t easy, and it’s about to get a lot harder for one stubborn lawman and the woman who still owns his heart.

The Heartsong Cowboy by Melissa Keir

Can two people, one horse and the power of love cure a little girl?

Gimme Some Sugar by Stephanie Berget

She’s is a genius with cupcakes and croissants. He needs a ranch cook to whip up beef, beans and bacon. Love never tasted so good.

Her Fated Cowboy by Donna Michaels

Thrown back into the path of her first love, she finds hers is not the only heart fate has damaged.

She left town to chase her dreams…he stayed and ignored his…can they find love again?

A marriage of convenience ignites into a steamy romance and brings two strong wills together.

Make Mine a Cowboy by Sandy Lea Sullivan

She writes fantasy cowboys for a living…but she never expected to find her own on the back roads of Hill Country, Texas.

A cowboy honors a promise by working at a nudist resort but to win the sexy owner’s heart, he must bare more than his soul.

From gunslinger to ranch owner. He’s finding respectability a lot more dangerous than his former life of sin.

Under Pressure by Rhonda Lee Carver

The Stone sisters know their way with a gun, rope, three-inch heels, and a cowboy’s heart.

He can tame the wildest stallion, but can he tame a stubborn redhead that wants nothing to do with him?

The Real McCoy by Sabrina York

She mistakes him for a stripper…he is happy to comply!

Get a taste of: 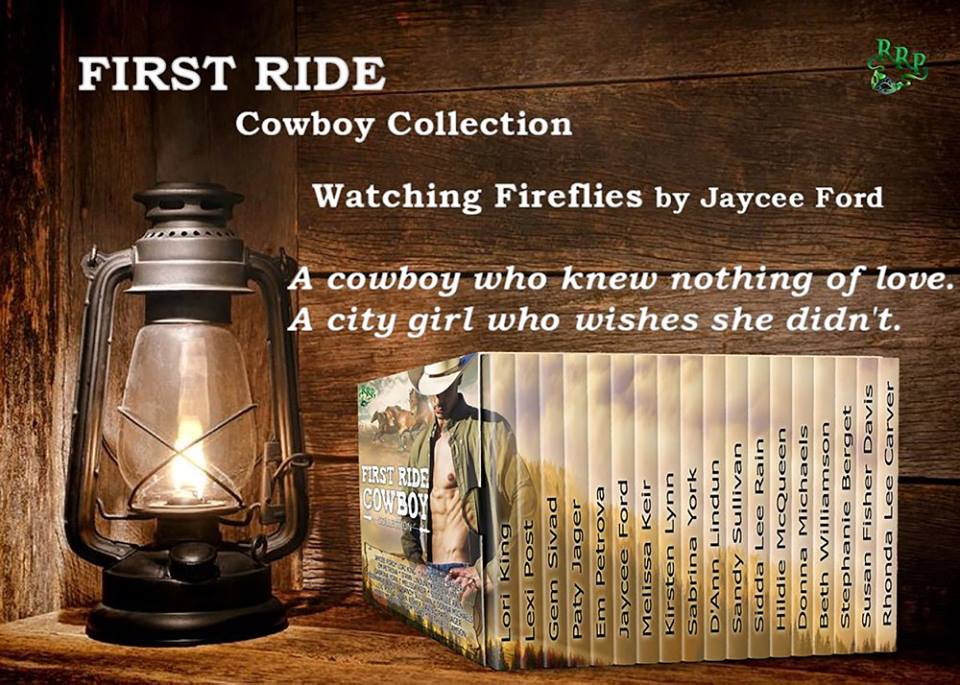 Jordan Hawthorne thought she had it all until a surprise for her fiancé turns into losing everything that she ever wanted. She flees her home in Charlotte, North Carolina to take a new job in the foothills of the Blue Ridge Mountains and make a new start where her ex-fiancé can’t find her. Jordan is just beginning to adjust to her new life in the middle of nowhere when a small town cowboy walks in and disrupts it all.

Tom McCloud never had time for a serious commitment, always too busy with running his grandparents’ farm. Everything changes when he stumbles upon a broken-hearted city girl and a steamy buzz ignites between them. But what happens when the city girl can’t stay hidden in the country for long?

His charming smile lit up his face, making my knees almost turn to jelly. “It was my pleasure.”

He backed away to head downstairs when an uncontrollable urge came over me. I no longer hesitated. I didn’t want him to go. As soon as he took the first step down the stairs, I asked, “Would you like come in for a beer or something?”

He paused, his head turning back toward me. His cheeks twitched like he was trying to contain a smile, but with his face still gleaming, he answered, “Yes, I would like that a lot.”

Tom brushed passed me as I held open the door for him, and I could smell a hint of sun and something else I couldn’t describe. Maybe it was the scent of a cowboy. With the scent lingering and my body completely tingling, I walked to the mini fridge encased inside a wooden cabinet underneath the flat screen, and I grabbed two bottles of beer.

“Is light okay? That’s all I have in my fridge.”

As I turned around, my clutched fists landed against his ripped, rock hard abs. My eyes leveled just above his chest and I bit the inside of my lip. I dragged my gaze up to his piercing blue eyes, and I forgot to breathe.

His hand caressed my cheek while his gaze flickered between my eyes and my lips. My heart fluttered as it drummed an anxiously hopeful beat. What was happening between us was inevitable, and there was no stopping the inevitable. Our breath intertwined just as his lips brushed against mine. My body almost lost all will to function as it hummed with need. His eyes found mine again as if seeking permission to continue. I wasn’t about to stop him. He leaned into me once again. I responded with a passion, a hunger.

My arms wrapped around his neck, dropping the bottles of beer onto the rug-covered floor. He pulled me flush against his body, and my fingers instinctively laced through his brown hair. My tongue swept against his lower lip; his gently massaged mine. The arms that wrapped around me engulfed me in a heaven that I never wanted to leave. My inner desires pooled within as a moan rose up, but I didn’t know if it came from him or me.

As much as I didn’t want to, I broke the kiss, and as we both inhaled deeply, he rested his forehead against mine and whispered, “Did you feel that?”

My body strummed with desire as my heart thumped an erratic beat. I exhaled slowly as my eyes remained closed, and I whispered, “Yes.”

His lips skimmed across mine again while his hands slid around to my hips. As we ended our kiss, my eyes flickered open to find his full and bright. His mouth fought against a smile, but his cheeks quirked, giving him away. As the smile finally eased up his cheeks, he asked in a whisper, “Will you have dinner with me?”

Bestselling author Jaycee Ford grew up chasing street cars around the city of New Orleans. After doing a four-year stint at Louisiana State University, she earned a Bachelor of Arts degree in History and fled for the foothills of the Blue Ridge Mountains. New Orleans beckoned her home again where she put her love of the foothills into a series of romance novels. In between writing, she’s found behind her desk at a top rated law firm … or still chasing street cars.