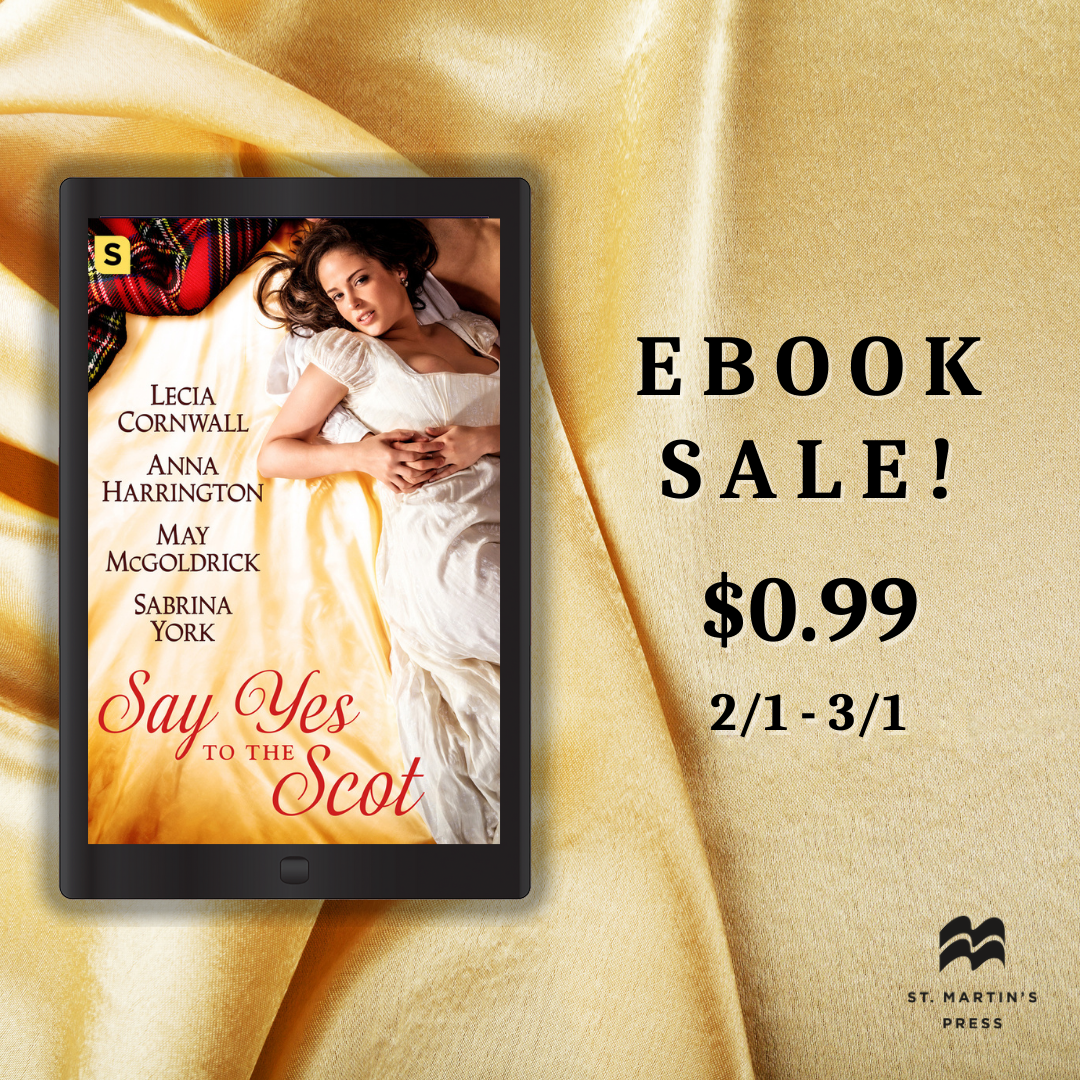 Say Yes to the Scot is $0.99 from 2/1 – 3/1 at all US & Canadian retailers.
Please share with your friends who love Regency Romance.
Get it now HERE! https://smpromance.com/historical/say-yes-to-the-scot/
SAY YES TO THE SCOT

Duncan glanced at Peter who had dropped back down on the divan and covered his face with one arm. He was no use to either of them at this point. Besides, this business was between himself…and Catherine. He gently pressed her into the king’s chair, took one next to hers and scooted it around until he faced her. “You and Peter have no home now.”

“Not even the Wilds?”

“Not even the stables.” He tried to be as sympathetic as he could. This was difficult for her. Shattering. And it would only get worse. “For you, things are not so bad. You’re a lovely girl. You can marry well.” He ignored her snort. “But for Peter…” He let it hang there like a razor sharp icicle clinging to a roofline as a melt approached.

“He has other debts.”

“Small ones, but substantial enough for his creditors to ask for retribution.”

They both knew what that meant. Debtors’ prison. A truly nasty end for a feckless lad. But Duncan had the inclination to allow Peter to languish there—at least for a while—to teach the boy a lesson.

“Newgate would kill him,” Catherine whispered.

Her gaze snapped to him. “And how do you know?”

He lifted a brow. He had no intention of telling her that he’d visited and reprieved more than one foolish friend.

“He did bring this on himself. He gambles like a fiend.” A fiend who thinks he can never lose.

Duncan swallowed an outraged laugh. “I believe I already have.”

“Buy out all his debts? Return his wealth and property to him? Pat him on his head and charge him to go forth and risk it all again? What kind of fool do you think I am?”

“A heartless one.” She stood and whirled away, which gave him cause to follow.

But honestly, he was not the heartless one here.

When she spun back, he was right behind her and they were far too close. The tips of her breasts brushed against his chest and he nearly swallowed his tongue. She flinched as well, as though the touch had been like a bolt of lightning. She gazed up into his eyes, hers wide and damp. Her lips parted and her pink tongue dabbed out to wet them and his knees nearly failed him.

Damn she was so beautiful. So glorious. He wanted to kiss her now, ravish her. Claim her. He wanted—

“I cannot bear the thought of marrying one of my suitors,” she said, and he was brought back to the moment, his intent, with a powerful lurch.

“There may be a solution.”

She tipped up her delicate chin bravely. “And what might that be?”

So simple. So perfect.

Her jaw dropped and he fixated on the sight of her open mouth. If that was not a demand for a kiss, he did not know what was.

He pulled her into his arms, reveling in the warmth, the curves of her slight form, and lowered his head.

She tasted like heaven. Sweet bliss. Just like he remembered from that day when he’d pulled her from the loch and forced her to breathe again. Her scent infused him, enamored him, enraged a long-banked fire within him.

She would be his.

He would have her.

Catherine Ross would be his bride, just as he’d dreamed of for so many years. Just as he’d fought and scrabbled and worked for. His life ambition had come to him and the moment was so sublime…

Until she pulled away and stared at him with an odd mixture of shock and fear limning her eyes.

And she hauled back her delicate fist.

And punched him in the jaw.

By the time he’d recovered from the shock of what he could only interpret as her refusal of his suit, she’d whirled away and flounced off to her chambers—God only knew where—in the bowels of the enormous mansion.

But this was only the first salvo in his campaign to win her.

And win her, he would.

Please share with your friends who love Regency Romance.
Get it now HERE! https://smpromance.com/historical/say-yes-to-the-scot/
If you love this genre, 99 cent books and tiara giveaways, don’t miss
A Midsummer Night’s Romance
with stories by May McGoldrick, Sabrina York, Anna Harrington and more!

18 Responses to Say YES to the Scot on SALE