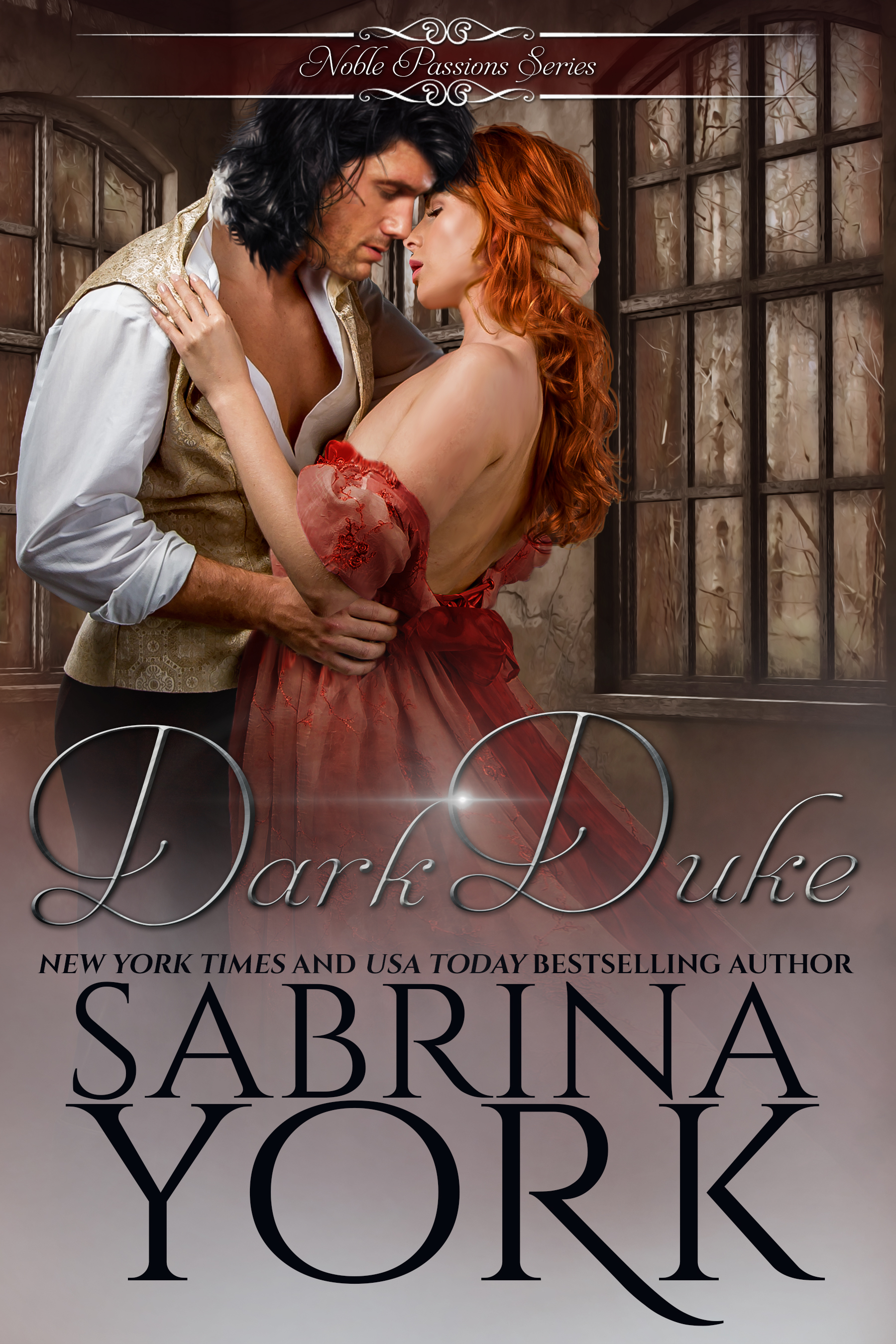 Edward Wyeth, the Dark Duke of Moncrieff’s life has been turned on its end. His well-ordered home has been invaded. By destitute relatives. From Scotland. How on earth can he write Lord Hedon’s salacious novels with hellions battling in the garden and starting fires in the library? But with the onslaught has come a delicious diversion. His cousin’s companion, the surprisingly intriguing Kaitlin MacAllister. He is determined to seduce her. Using her desperate need for the ready and her talents as an artist, he convinces her to draw naughty pictures for his naughtier books…and draws her into his decadent web.

But Kaitlin has a secret. She’s fled Scotland—and a very determined betrothed. When Edward’s cousin is kidnapped and held in her stead, Kaitlin is honor bound to return to her homeland and rescue her—much to Edward’s chagrin.

An Excerpt From: DARK DUKE

Edward skirted the mêlée in the garden and made his way to the far end of the estate where there was nothing but flowers and trees and a placid little pond. Nothing to attract diminutive fiends bent on mischief. He would sit in the folly until his temperature returned to normal.

Dear God. He’d had no idea having the Wyeths of Perth take over his house would be such a nightmare. If he had suspected as much, he would have turned them away at the start. They would probably have crawled in under the door. Through the cracks in the flue. Vermin had a way of finding entrance.

But now. Now they were here.

He had to get rid of them.

Perhaps he could send them back to Scotland.

Scotland would revile him for it, but he had little use for rocky tors, lochs and sheep.

Then he thought of Violet and his heart lurched. It would crush her to be trundled back to what she referred to as the bleak wilderness. She was looking forward to a glittering season in London. She was seventeen. She needed a husband. A husband of Quality. That might be difficult to find in the wilds of Scotland.

And Ned. Ned was twenty. He was just starting find his way with the ton. He’d made some friends—decent fellows.  He’d even been receiving invitations to game at White’s.

The two of them—the normal two—deserved better than being lumped in with the rest.

He whacked at a rosebud as he passed. It exploded into a flutter of petals. He refused to feel any sympathy.

He couldn’t send them packing.

Hell. He was a duke of the realm. He had six houses spread throughout the empire. Why hadn’t he thought to purchase a spare in London?

He would. He’d buy them their own house. Move them all, lock stock and—well, maybe not the barrels, as the older boys did like to drink. He’d move them all into their own domicile.

With Aunt Hortense. Let her manage them.

His life would once again be orderly. He would be the master of his own abode. Free to pursue the life of a wealthy dilettante.

He rounded the bend with a satisfied smile on his face. The trickle of the fountain in the pond was a balm to his tormented soul. Birds sang in the trees. The sun—well, it almost shone. It was a beautiful day.

Soon, the world would be right again.

Soon, they would all be gone.

He skipped up the steps of the folly with a lightness of heart he hadn’t felt in ages. A book on the bench snagged his attention and his mood dipped, but only a bit. Someone had been here. But they were gone.

He picked it up and flipped through it and stilled.

It was a sketch book.

The first page was an attempt at this scene. The flowers and trees, the pond and the little fountain. Not very good. But the second arrested his attention. It was a simple line drawing of Violet. And it was stunning. The artist had managed to depict her beauty, but also captured that glint in her eye, the particular quirk of her lips. Her soul.

The next sketch was one of Ned, showing a brash young man, standing insouciantly with his hands shoved into his pockets, whistling a silent tune. The next was of the twins—whatever their names were—dark heads together plotting some manner of mayhem.

It was so realistic Edward expected them to leap from the page and whack him with a cricket bat.

But it was the last sketch in the book that stole his breath. It was a portrait, in profile. His own face. But not an Edward he would ever recognize. This man was heroic, tragic, a solitary soldier. It was only a few lines drawn in charcoal, but it revealed so much about him. Things he didn’t want anyone to ever know.

It was horrifying. And remarkable.

He snapped the book shut and spun around.

Of course. What’s her name. The girl. The owl. From last night.

“Oh, you found it.” She stepped into the folly and took the book from his hands. He did not know why he let it go.

“You left it here.” An accusation. Really? He hadn’t intended for it to come out like that.

She chuckled. “I had to go rescue Hamish. I was coming back.”

“What…why did you have to rescue Hamish?” This was her work? She saw him like that? And hell, she was a damn fine hand. How he would love to turn such talent to…darker purposes. What a pity she was such a prude. The kind of work he could offer her would make her rich—rich enough to quit serving as Violet’s companion.

But she would never do it. No decent woman would.

He must be crazed, truly crazed, to even think on it.

The gripping sketch of his wounded countenance lingered in his brain. If she could do that, if she could see through to his soul and bring it to life on paper—

Lord. She’d been talking. He’d missed the entire explanation. No matter. The question had been purely rhetorical.

“How long have you been drawing?”

She winced, clutched the book to her breast. He recalled what fine breasts they were. “I… What?”

“How long have you been drawing? You’re quite good.”

“You looked at my book?” She squawked as though he’d just admitted to peering up her skirts. The lemony face returned.  A beetled brow and pursed lips. It was, upon reflection, rather adorable.

“It was lying here.”

“You shouldn’t look at someone’s sketchbook.”

“You shouldn’t leave it where it can be found.” He crossed his arms over his chest and grinned at her. Damn, he loved her accent.

She sputtered. “I told you. Hamish and Tay were building a fort in a tree—”

“Yes. Yes. I know. You had to rescue him. Tell me, have they always been this much trouble?”

She blew out a breath. “You have no idea.”

They both laughed. It was a nice moment, because it seemed, for that brief flash of time, they were friends, bound in mutual misery.

And then he went and ruined it by letting his lust intrude. “So tell me, what did you think of that book?”

She tipped her head. “What book?”

“The one I gave you last night.”

She blinked several times, as though she had to try, very hard to remember. “Oh. That book. I didn’t read it.”

He stepped closer. “Ah. You like to look at the pictures, then?” He knew the sort.

“Edward.” He infused his voice with a low thrum.

“Your Grace. I didn’t have a chance to open it.”

She brushed an invisible speck from her skirt. “There was…a distraction.”

Well hell. “What kind of distraction?”

Her lips pursed. The look she shot him was not dewy in the slightest.

Still, he wanted to kiss her.

He wasn’t sure why. She was certainly not the most beautiful women he’d ever seen. But her face had character and charm—especially when she smiled. Her figure was full—the way he liked them—but she didn’t show it off to its best effect. In fact, if he hadn’t known what lay beneath the thick layers of crinoline and bombazine, he would have been fooled. She was prickly as a hedgehog and smacked him down at every turn.

So why did he want to pull her into his arms and smother her mouth with his?

Perhaps because of all those things.

Then again, perhaps just because.

He took the girl—whose name he could not remember, whose face he could not forget—into his arms and kissed her. It was a gentle buss, as kisses went, but extremely sublime. Because he’d surprised her.

Her lips were open, as though poised to speak. He took full advantage, sweeping in his tongue to dab at hers, nibbling and licking and tasting her sweet breath.

The prick at his side was not a surprise. He’d expected it.

He lifted his head and stared down into her eyes. Her expression was dazed and determined and perhaps a little dewy. “Not this time, darling,” he murmured. He took the knife from her hand and tossed it aside and then pulled her more fully against him.

And ah. She was soft. Sweet. Her breasts pressed against his chest. Her hips molded the cradle of his groin. Of course, he was the one doing the molding, but she didn’t fight him.

No. She sighed and tipped her head to the side so he could deepen the kiss. She tasted like ambrosia. A tantalizing flavor of cinnamon and woman and surrender. His ardor rose, and with it, his cock. He rubbed it against her belly.

She stiffened and tried to push away, muttering something into his mouth that sounded like “No.”

He changed his tack, running his lips down her cheek and along the line of her jaw to nestle in the crook of her neck. She shuddered. Some groan-like sound emanated from her throat. She clutched at his hair.

Thusly encouraged, he sucked at the tender skin of her neck. Nipped.

“Oh! Saints preserve us,” she whispered.

“The saints don’t care,” he responded, switching to the other side of her neck. He found a spot that delighted her even more and feasted there. In her distraction, she didn’t stop the palm skimming over her ribs to cup a breast.

He encased her. Ah. Exquisite. Full and round and pliable. He thumbed a nipple, testing its rigidity. She dipped as her knees gave way. He caught her. Swung her up in his arms and carried her to the bench.

From long experience, he knew better than to give a woman a moment to think. So as soon as he had her settled across his lap, braced against the wall of the folly, he kissed her again. With one hand, he stroked her nipples while with the other, he slowly drew up her skirts.