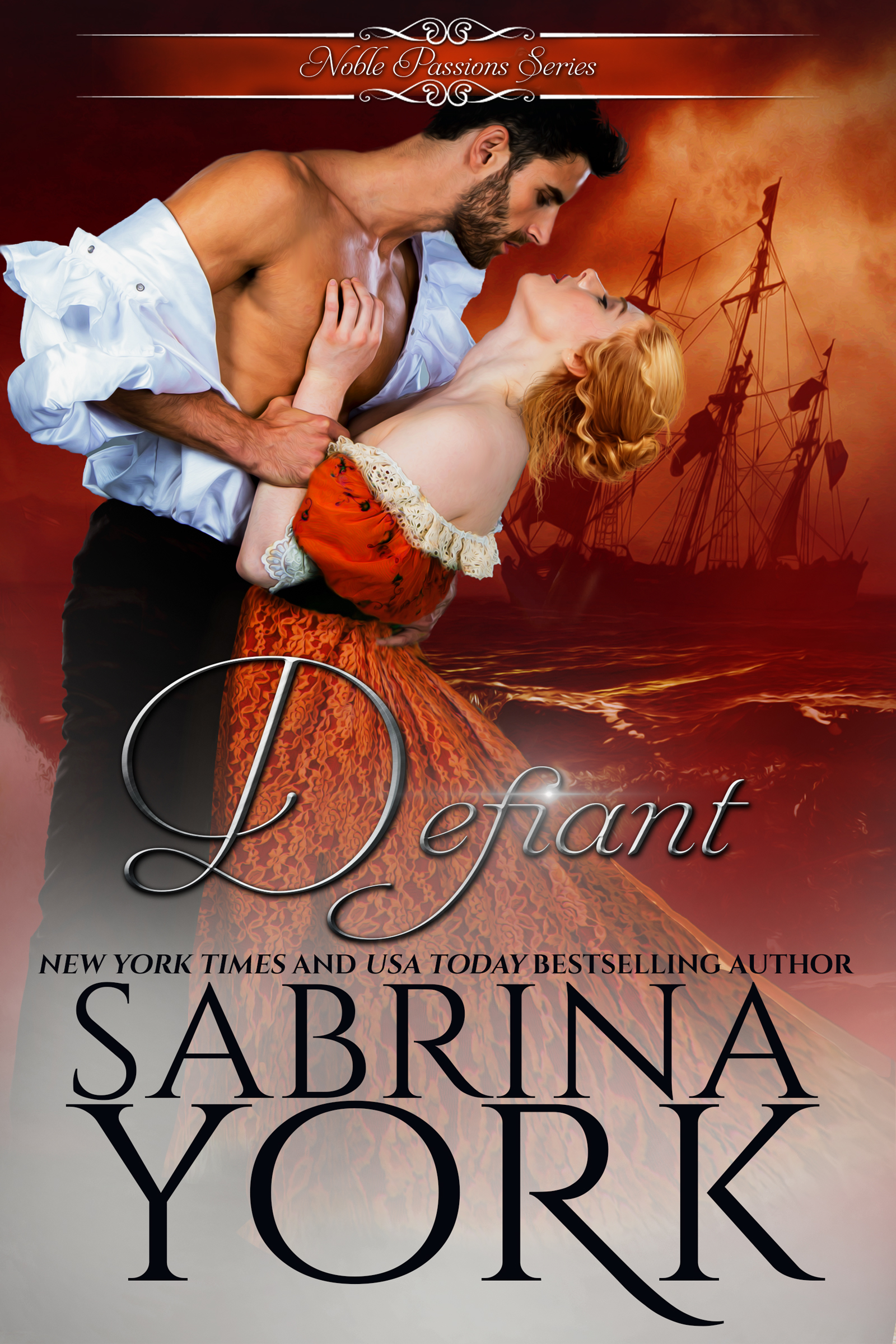 When rakish Ned falls in with the wrong crowd, his brother decides to send him to the Continent for “seasoning”. For Sophia, this just won’t do. She’s loved Ned for ages—and also longed for adventure. She runs away from her boring suitors and disguises herself as a cabin boy on the Defiant, the ship sailing Ned to Italy.

Ned knows he’s not good enough for Sophia, but once they’re on the Defiant, he can’t stop himself from touching her, tasting her, loving her. Not when a wild tempest and a band of ruthless pirates threaten them. Not when every look from her gives him such pleasure. And certainly not when she comes, warm and wild and willing, to his bed.

If they survive their voyage, Sophia’s brother might kill him, but it will have been worth every moment and every hot, sweet kiss.

Sophia stood on the bow of the boat in the dark as the wind and rain lashed her face. She loved it. Loved it. Not only was the storm elemental and fierce, it hid her tears.

Surely she hadn’t expected Ned to greet her with open arms. Not when she had barged in on his adventure as she had. But she certainly hadn’t expected him to be so horrid. His expression had devastated her.

But then her heart agreed.

Foolish to ever think that he—

She whirled around though she knew what she’d see. More glowering.

“What the hell do you think you’re doing?”

“I’m reveling.” She thrust out her chin in case he didn’t believe her.

He gaped at her. “Reveling?”

“Yes.” She didn’t mean to shout but his wintry demeanor annoyed her tremendously. She threw out her arms. “Look at this!”

“You could be swept overboard.”

“The wind is howling and the rain is savage. It’s glorious.”

“Then you go inside.”

“I’m starting to think Ewan is a saint.”

She glared at him. “What a beastly thing to say.” She hated that her chin wobbled a little. Hated that he winced.

“I’m sorry, Sophia. This has been trying for me.” He sluiced the water from his face. “Won’t you please come inside?”

“You did say please.”

He blew out a breath and offered her his arm.

She frowned at it. “I’m a cabin boy, remember? You don’t offer a cabin boy your arm.” When he didn’t lower it, she smacked it. “Someone will see.”

That caught his attention and he slowly lowered his arm. “Right, then. Come inside.” He followed her back to the cabin, his stride decidedly unsteady. If anyone was tipping overboard, it was most likely him.

When she once again stood in his chambers, she realized the folly of her actions. She hadn’t brought a change of clothes and she was drenched. So was he. Without a word, he relit the lamp and then opened his trunk and pulled out several shirts, two of which he tossed to her. “Change.”

That was it. One word. Just “change” and then he presented her with his back. She huffed a breath but did as he asked because she was really rather cold. The feel of the cloth falling over her chilled flesh warmed her. Because it was his shirt. It had touched his skin. She wasn’t sure why the thought sent heat scudding through her belly.

“Use the other shirt to dry your hair,” he suggested as he began toweling off as well.

She huffed a laugh. “All of your clothes will be wet.”

“They’ll dry. Are you clothed?”

He turned. And froze. His gaze locked onto her bare legs. “I-I thought you said you were clothed.” A squawk.

“I am.” But the intensity of his stare made her self-conscious so she slipped into the bed.

“Close your eyes,” he said as he unbuttoned the damp linen clinging to his chest.

“All right.” She did. But she peeped.

He ripped off his wet shirt and her breath caught at the sight of his broad back. Muscles rippled as he moved and she swallowed. He was beautiful. He tugged the fresh shirt over his head and she nearly whimpered as that magnificent vision disappeared. But then he unfastened his trousers.

All pretense of not peeping evaporated.

He sat and took a moment to work off his boots. And then he stood. His trousers were tight, as was the fashion, and he had to peel them off. As he bent, she caught a flash of his bare behind.

She must have made a noise because he whirled around.

His cheek bunched when he saw her watching. “You’re supposed to have your eyes closed.”

She hunkered in the covers as though that would disguise the fact that her eyes were open wide.

It was probably wrong to grin at him but she couldn’t help it.

“Stop calling me that. It always makes me think I’m in trouble.”

“You are in trouble. You have no idea how much trouble you’re in.”

She tipped her head to the side. “We both know Ewan will be so relieved to see me he’ll forget how angry he is—”

Ned stilled and fixed her with a dark glare. “What makes you think I’m talking about Ewan?”

Why a shiver rippled through her, she had no idea. She’d been spanked once or twice as a child and she hadn’t cared for it in the slightest. But something dark and domineering in Ned’s tone made her womb warm.

“Wouldn’t I? Now look away. Your brother would skewer me if I gave you the education you’re about to have.”

She attempted not to snort. Ned—and everyone—thought her a prim and innocent miss on account of the polish she’d acquired at Lady Satterlee’s. Nothing could be further from the truth. As a child, before Ewan had made his fortune, they’d lived a hand-to-mouth existence in the slums of Perth. She’d seen more than one couple rutting against a wall in a dingy alleyway. And at one point she and her brother had taken refuge in a bordello. She’d been only seven, but if she’d had an education, she’d gotten it there. She could probably teach Ned a few things.

Still, because he seemed to expect it, she squeezed her eyes tight and didn’t hardly peep at all as he finished changing. Besides which, the spot she was interested in was mostly shadows.

With a great huff, he threw himself back into the chair. “Now go to sleep.”

“Don’t you want me to put out the light?”

“I’m not leaving again tonight.” Probably. Unless her despair overcame her once more.

“Leave it on.” A grunt, and not a very nice one at that. Why he had call to be annoyed, she couldn’t fathom.

Blast and damn, he was an annoying man. Sophia grunted as well and rolled over, facing the wall of the cabin. She studied the patterns the swinging lamp made for a long while, listening as he shifted one way and then the other.

It was really unfair for him to have to sleep in the chair. This was his room. But he would never share her bed. She grimaced at the way the words came out but it was true. He wouldn’t. Unless…

She rolled over again and watched him twist in the chair. He caught her eye and frowned.

He stilled. Then barked, “Put on another blanket.”

“There aren’t any more.” She faked a shiver. She wasn’t cold in the slightest. She never was. Ewan said she ran hot. “Brr. My teeth are chattering.”

His glower became a frown.

She sneezed. Or something like it. “I don’t know.”

His brow wrinkled. He stood and made his way across the tiny chamber as though on his death march. He set the backs of his fingers to her cheeks. His frown darkened. “You are warm.”

“No. I’m cold.” She shivered and peered up at him, her eyes as wide as she could make them. “Won’t you warm me?”

He wrenched his hand away as though she’d burned him. “What?”

“Lie here beside me and warm me up?”

“There’s not enough room for both of us.”

She’d never heard her name in such a strangled voice, not even when Ewan was at his wit’s end. “Just for a bit? You can be on top of the covers. Surely that is decent.”

The muscle in his cheek bunched again, as though he was grinding his teeth.

He gusted a sigh. “All right, Sophia. Scoot over and make room.”

She did. With alacrity.

“And roll over, facing the wall.”

She frowned at him “Why?”

“Oh, all right.” But only because he said please. And because when she was facing the other way, he couldn’t see her grin.

He settled in behind her and a shiver rocked her. He was warm. And he smelled delicious. Not fishy in the slightest. It was delightful, lying here with him. She closed her eyes and imagined he wanted this as much as she.

If only. If only.