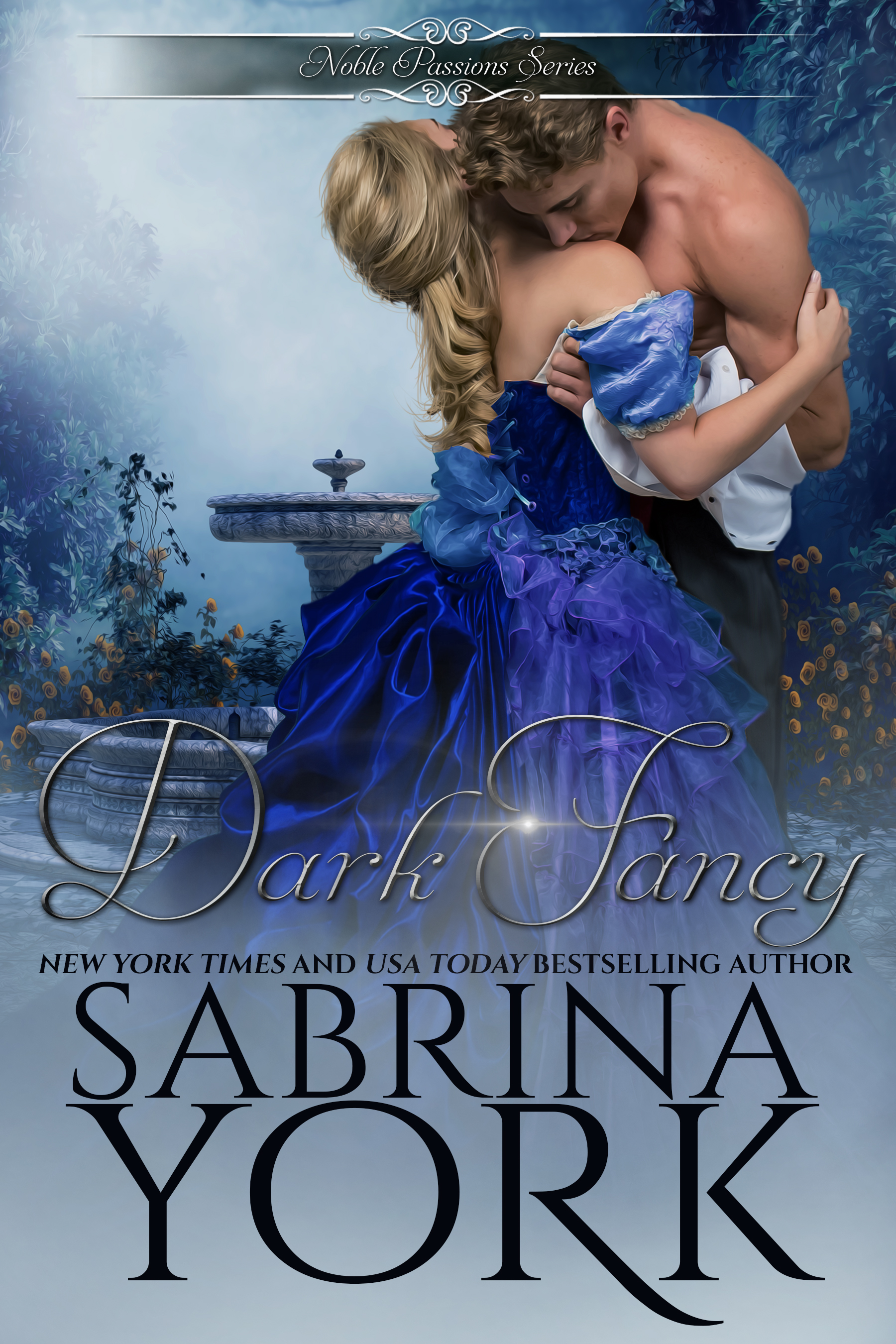 When Lady Helena Simpson flees an unwanted marriage to a revolting lord, she finds refuge in a humble gardener’s cottage. Cocooned and safe with James, a charming, handsome man unlike any she was ever known, Helena concocts the perfect solution to her problem. She asks—begs—James to ruin her.

Surely her betrothed will repudiate her if she is no longer pure. And if all her efforts fail and she still ends up married to a horrid man until the end of her days—she will, at least once, have known true passion.

But James is not all he seems. He is, in fact, a wicked lord with a dark fancy. When Helena awakens his desire, he becomes determined to take everything she has to offer, and more. No matter the cost.

An excerpt from: DARK FANCY

James stared at Eloise, brave, proud, innocent Eloise. He could relate to the passion in her plea. He had a sudden desire to be released from a betrothal himself. He fiddled with the corner of his napkin. “There is always the chance your betrothed won’t care if you’re ruined.” Some men did not.

Her lashes fluttered. When they rose again, there was a look in her eye that sent lust coursing down his spine. It settled in his cock. “If I’m to be married to a bilious flounder of a man for the rest of my life, I should like to know passion just once. Just once, James.”

“J-just once?” His voice cracked.

Her smile blossomed. “Perhaps more than once.”

He had to laugh, although this was clearly no laughing matter. “My dear. I would be happy to oblige.”

“Excellent!” She clapped her hands with glee.

Unfortunate, that, because it made her look, once again, like a little girl. But then she picked up her cup and ran her pink tongue around the rim, lapping at the wayward drops. He reached for the second bottle.

She held out her cup for a refill. “You will need to show me what to do.”

He almost forgot to stop pouring. Hell yes. He’d love to show her what to do. He’d love to instruct her—in elaborate detail—what, precisely, to do. Something snarled in his belly.  His palm itched.

He forced down that decadent desire. Chained the beast.

For God’s sake. She was an innocent, a virgin. If he opened with that card, not only would she truly be ruined, she would probably hie off to the nearest nunnery and spend the remainder of her life in seclusion.

Oh, he would bed her. He would despoil and beguile her, but only in the very gentlest of fashions.

But his fantasies, the darkling imagery of what he would truly like to do, simmered.

“Are you…” He cleared his throat. “Are you ready for your bath?”

“Heavens, yes.” Once again, she clapped her hands.

The childlike gesture was off-putting since, at the moment, he was thinking of sinking his cock into her body and swallowing her moans with his mouth. But he liked her enthusiasm. It also made him desire—very deeply—to tie those hands to the bedposts. So she couldn’t clap them.

Why that thought made him salivate, he didn’t know.

Ah hell. Of course he knew.

Despite the lust snarling through him, he managed a modicum of chivalry, although it was perfunctory at best. “I’ll fashion a curtain.”

Her next words nearly unmanned him. “You don’t need to.”

“You don’t need to bother with a curtain.” For a shy and demure innocent, she had something of a brazen streak. “I mean, if we’re going to…you know…”

“Yes. If we’re going to make love, you will see me naked anyway.” A frown crossed her brow. “Won’t you?”

He chuckled. “Most certainly.”

“I thought so. But people are not very forthcoming when one asks about such things.”

“Really?” That had not been his experience in the slightest. Then again, she was a girl. The world sought to save and protect innocence. Until it ravaged it.

He did not know why he trembled as he poured the heavy buckets into the tub. He was a man of the world. Jaded and used to much more decadent fare than initiating virgins to the delights of the flesh. He should hardly be nervous about the prospect of having her.

Then again, maybe it wasn’t nerves. Maybe it was just pure, seething desire.

He had planned to seduce her—expected it to take hours of sweet whispers and furtive caresses. Never in his wildest dreams could he have anticipated this—that she would gaze at him across the dinner table and politely ask him to ruin her.

She was, altogether, a different kind of woman. Unlike any lover or mistress or professional girl he’d ever been with. And the prospect delighted him.

He swished his fingers in the water and added another bucket of cold to balance the temperature. He didn’t want her delicate skin burned because he was in such an all-fired hurry to get her naked. “There. Perfect.”

“Thank you, James.” Her voice was low, melodious. It sent a ribbon of pleasure through him.

“I cannot tell you how ready.”

He swallowed. Yes. He felt the same. His pulse thrummed in his temple. And elsewhere. “Milady, your bath awaits.” He gave a great flourish, his gaze firmly fixed on her.

She reached for her hem and then stilled. “Could you turn around?”

Disappointment raked him. “Of course.”

“I’ve just never disrobed before a man before.”

“I understand.” Damn. Damn, damn and damn. He turned his back. Every rustle of fabric grated on him. He wished—oh so fervently—that Babbage had a mirror. He so would have liked to watch.

He winced. His pulse pounded. God. She was in the water. Naked.

“Is it good?” His words were, at best, a strangled rumble.

He had to look. He couldn’t not.

The sight he beheld was exquisite. Eloise had leaned back in the water to wet her hair. Her breasts, delectable pink islands in the sea, thrust up. The nipples were fat and hard, distended.

He swallowed around the tight ball in his throat. His nails scored his palms.

Though he was rooted to the spot, determined to give her some modicum of privacy, his imagination ran rampant. What he wouldn’t like to do to those tempting tips.

“James?” Her soft call wrenched him from a delirious fantasy. Her expression was tentative, shy, but he could see the light of determination flickering there.

“Do you suppose there’s any soap?”

He blinked. Soap? He had trouble interpreting the word. His mind was occupied elsewhere. “Ah. Soap.” He rummaged around in Babbage’s cupboard, cursing himself for not remembering soap. He found a thick chunk of lye soap and brought it to her. How he hated that it wasn’t something more delicate. Something lilac-scented.

“Thank you.” She didn’t take his offering. Rather she peered up at him with those beautiful emerald orbs and said, “Will you wash my hair?”

His breath stalled. Would he? He fell to his knees at her side—unmindful of the puddles on the plank floor—and looked at her. Her nipples pebbled even more at his perusal. His mouth watered.

He dragged his attention back to her face. “Y-yes?”

God. Yes. He made a lather and scrubbed it into her hair. It was glorious, golden, smooth and silky. He worked the soap through the strands and as he did, massaged her scalp. She closed her eyes and groaned.

“Of course.” Reluctantly, he drew away. And she submerged.

This time he could not resist.